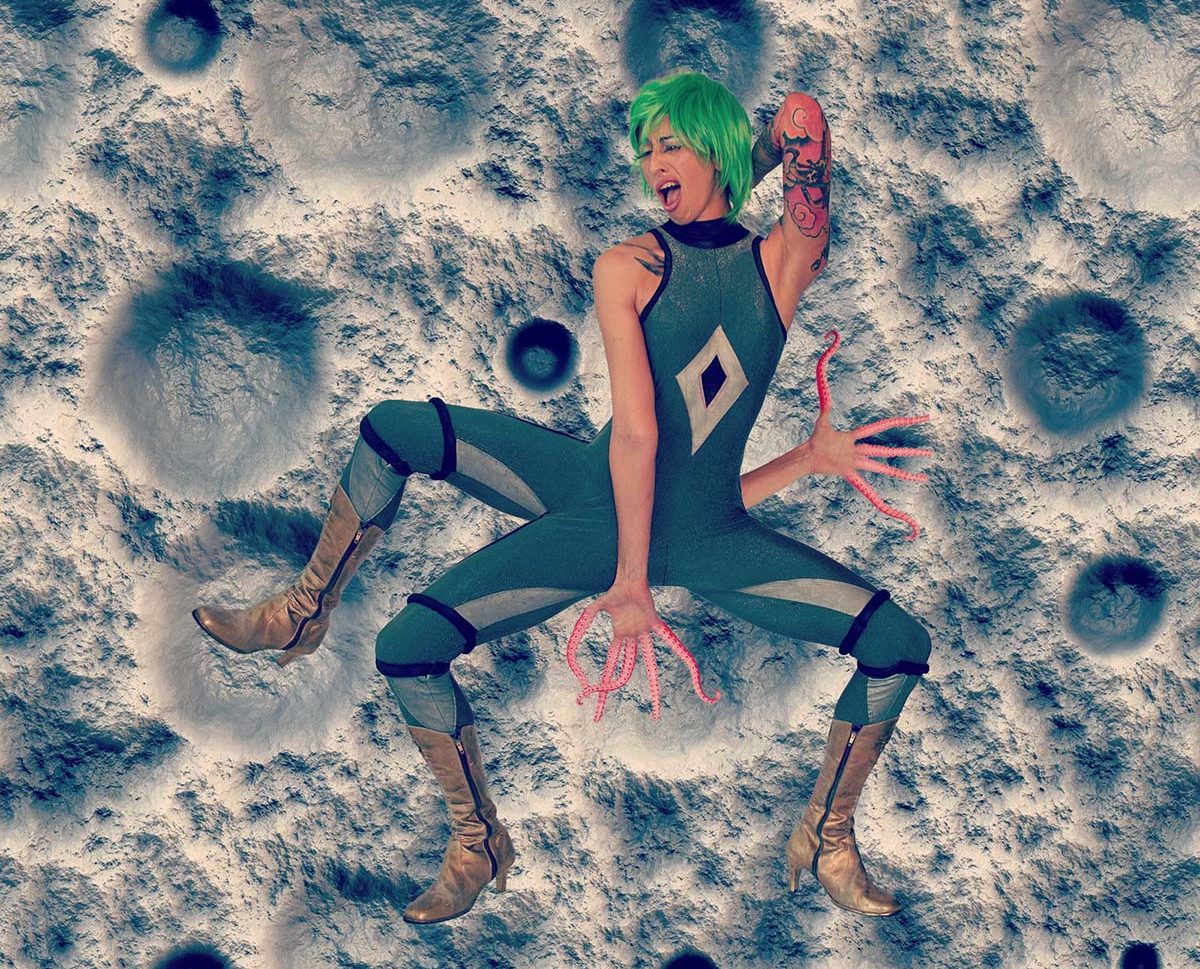 ‘Dear man. You are confusing. I have a vibrating. Vagina?’

It was as if the goddess of love herself were testing him. Ralph was just moments away from joining the priesthood when a bright light had engulfed and lifted him from the ground. Thinking his heavenly father had come, he’d closed his eyes in rapture, but when he opened them … this.

New Arrivals 4 was customised to allow for the easy harvest of the human species’ man sap. The heavenly alien Aurora approached her new specimen with growing excitement. Human, yes, but unexpectedly divine!

‘You are desiring succulence?’

Ralph tugged at his white collar, suddenly too tight around his thick, veined neck. ‘That’s what this is about hey? Probing humans?! Sucking their baby gravy? You’d better not cross me or by God you’ll be sorry!’

Oh, the humanity! Aurora flung herself onto a floating pink puffy poof, her multiple shoulders heaving with sobs. This was all wrong—his righteous alien attractiveness, her damned robotic speech.

‘Why are human interactions so fraught? I merely want to mate with one!’

Ralph awkwardly patted the golden nebula of Aurora’s back, though it tempted his blasphemous hand to slide down its slippery ellipse. ‘Come, come. Here now. Alien, lovely alien thing, lady. Don’t cry. It’s just that … for everyday people, in the human world, other things would need to come first, like … introductions … dinner and a movie … love.’

‘Tell me, human. What is this thing called … love?’

Pink sexy clouds futzed around Ralph, nudging his knee; he kicked them away. Damnation, it was hard to concentrate! Aurora inserted herself between his arm and chest, her face raised towards his with a look of childlike supplication.

Ralph prayed for guidance as Aurora shifted position and her otherworldly legs wrapped themselves around his hips. She began to gently grind against the ungodly growth that graced his groin. This was all going to hell!

Aurora dragged him to the floor to prepare for docking, her fourth hand stroking his Satan’s sceptre. As Ralph fell into paradise, she thrilled at how human anatomy could telescope under heat and motion. In an attempt to extract its genomic fluids, she applied more pressure. Unexpectedly, however, she began approaching her own event horizon. She was teetering sweetly on the edge of a professional breakthrough!Ralph tried desperately to extricate himself, but his Judas hands, instead of pushing her away, grabbed her frog-like fingers and pulled her closer, crushing against the moist lycra of her breasts. The gravitational pull of her celestial body dragged him in a tractor beam towards her milky way, which at the last minute turned into a black hole. With her dark matter gripping his Roman spear, his brain collapsed under the weight of his own approaching big bang, and a pulse began beating a countdown to blast-off. He was vibrating with the power of love—in a place both holy and unholy—dear heavens above, he was ascending!