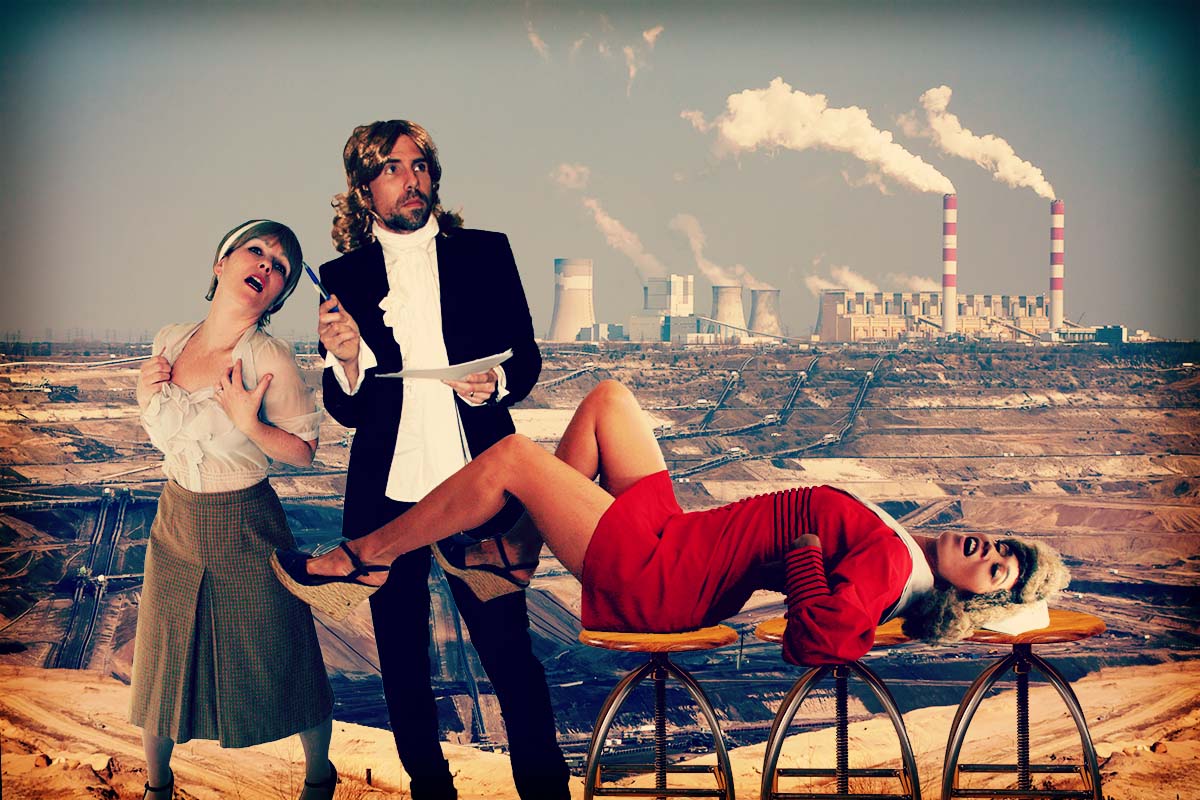 I heard the click of his belt coming off and then the rasp of his coal-dust ravaged lungs as he moved towards me in the dark. I was in his element: a place where his rough and calloused hands could strip the layers of resistance and sensible, hard-wearing workwear from my quivering body. The mine was no place for a gentleman, and he was being anything but gentle.

Through a series of coughs and a sensual wheeze, he tore open his orange vest. The matted, sweaty hair, and rippling vista of his chest was a rugged outcrop from which to fall towards the growing boulders that lay below. We had climbed into the cab of his earthmover, but I hadn’t expected the earth to move quite so much.

He wheezed again and pushed me against the dash. My heart was racing, my thoughts pulverised into tiny pieces by the rock-crusher of my need to be with him again—like that first time in the demountable after he admitted the reason he never spoke to me had less to do with his chronic obstructive pulmonary disease and more to do with intense shyness.

His tongue fossicked around the entrance to my lady cave, testing and sampling before it was time to go to work and take his impressive tool deep into my super-pit. I licked his face; the combination of coal minerals and stale sweat made my tongue dance with anticipation. I wanted him to take a core sample from my innermost place. Even the smell of his hydrogen-sulphide-covered King Gees could not stop the eruption of decollate desire plunging deeper into my bore hole.

I longed for him to drill deep into my damp shaft of passion. The build-up was too much; I bit down on his shoulder and he started his machine. A titanic rumbling—matched only by the build of my need for him—was like a pocket of gas; a stray spark could ignite our love in a cave-in that would lose us both for days.

I gasped in ecstasy as he flew in and flew out of me repeatedly. How deep would our love go? What would happen if his transfer to Mackay came through? Would our rough and tender love survive a long distance collapse, like a group of Chileans, in the hope that we could be reunited by the sunshine of our love? Finally, a word I could parse escaped his ravaged lungs: “You’ve excavated my heart.”And with seven syllables, my own heart was set on the conveyor belt of destiny towards the smelter in which all others would be extracted and our love would be pure.

St. John St. John is a first response homeopath, Krav Maga enthusiast and classically trained actor/spokesperson for the two gentlemen who write under the nom de plume Phoenix Le Claire. A passionate squash player and qualified celebrant, St. John is available for hand-fastings and other love ceremonies. His alter ego is Lucas Stibbard.

Amber Lance is not an alcoholic. Clues as to her alter ego, Lisa Fa’alafi, can be found at the websites for Polytoxic and Hot Brown Honey.


Meeting His NeedsThe Rigid Dirigible, and the Proposal Made Therein
Loading Comments...