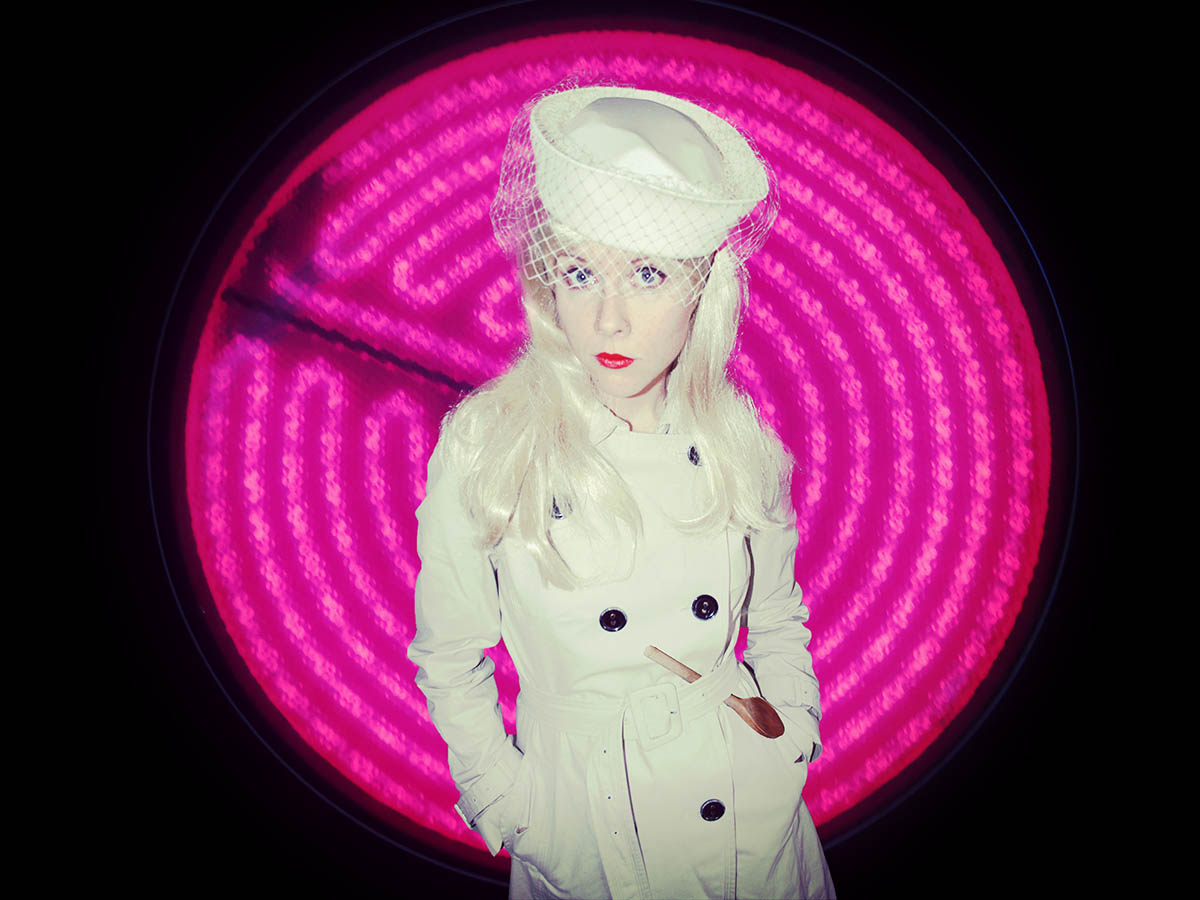 Her name was Cookie L’Aperitif and she was pretty to look at but hard to crack, like a candy cane the week after Christmas. Heir to the L’Aperitif culinary fortune, Cookie was set to receive millions since her father—famed restauranteur and businessman Basil L’Aperitif, a man who could flip an omelette and run an empire like that Betty Crocker dame could sell cookbooks—had been found murdered. His body was diced up with a meat cleaver and thrown in the garbage at his very own restaurant, Herb’s, like a second-rate cut of steak. Basil’s salad days were over—and now Cookie would be dining out on her Daddy’s dough.

This was no coincidence. Private Investigator Scotch Stiffwood smelled something fishy; and it wasn’t the catch of the day.

It boiled down to this: Stiffwood knew Cookie was sweet on him. She was a cookie cutter femme fatale, and she’d batted her lashes like she was fanning flames when he’d told her he was the one on her Daddy’s case. But she was hiding something—and Stiffwood was damned if he was going to miss out on finding the coin in this piece of Christmas pudding.

Stiffwood was going to pay Cookie a visit—he told her he wanted to mull over some theories about Basil’s demise. If Cookie had a taste for his charms, Stiffwood would strike while the oven was hot and use the time to make her confess. He only had one chance, and he couldn’t blow his cool.

Stiffwood needed a whisky. What he had was a throat drier than a plate of stale arrowroot cookies and palms that were sweating like onions in a pan.

Cookie opened the door at six on the dot with a bottle of brandy and a smile that oozed like honey. ‘Detective,’ she cooed, ‘I just can’t wait for you to grill me. Drink?’

The label said Four Roses, but those flowers were long dead—this stuff tasted like drain water in the middle of an LA summer. What was a rich dame like Cookie doing serving such budget booze?

‘Hungry, Detective? I was just about to bake some cookies.’ Cookie slowly pulled a rolling pin from a draw and widened her eyes. ‘It’s so big, Detective! Why, I can barely fit my fingers around its shaft! I might need you to lend me a hand.’

This was more like it—the rolling pin and the question that went with it. Cookie’s baking was better than a Hollywood starlet’s smile and twice as trustworthy; any buns in her oven were ones worth waiting for. ‘I’ll drink to that,’ said Stiffwood, raising his glass while Cookie assembled a shifty-looking group of ingredients on the kitchen bench.

Stiffwood blanched. He was no chef; but he knew a cheap line-up when he saw one, and there was no way a girl like Cookie would buy the same brand of butter as a PI who preferred Camels and coffee to chichi cuisine. Something was off, and it wasn’t the dairy.

‘Why so quiet, Detective? Here—want to help me with some … beating?’ Cookie handed him a bowl. Her hand lingered over his and he felt his internal thermometer beginning to rise. He beat the sugar and butter together like they were asking to get creamed. Soon they began to turn pale. Their game was up and they knew it.

He stopped beating and Cookie took over, sliding in the egg and vanilla and swiftly bringing the mix to a finish. She took out a separate bowl for the flour, baking soda, and salt. It was like she wanted them alone; like she didn’t trust them.

Stiffwood didn’t trust Cookie, either; but just like a watched pot never boils, it was hard to stay focused while he was looking at her.

It was time to turn up the heat a little further. ‘Need a hand again?’

‘Sure, Detective. I never did believe that too many cooks could spoil the broth.’ She passed the spoon with a saucy smile.

The sugar and butter was starting to look shady. Its number was up; and so, predictably, was something else. Stiffwood added the sugar and butter to the flour, stirring it in slowly—he didn’t want it to peak too soon. Soon, the mixture turned stiff, like a croupier’s smile. It wasn’t the only thing getting stiffer by the second.

Stiffwood’s stirring arm felt heavier than a broken heart. The tension was sizzling.

He covered up the dough and put it in the refrigerator. He stayed with his back to Cookie; he couldn’t turn around just yet. He lit a Camel. He had to cool down.

‘Ms L’Aperitif,’ he said, ‘I’ve got an appetite for a good mystery, and it looks like we’ve got one cooking right here.’

Cookie’s eyes widened. She was caught in his net and beginning to writhe. ‘Detective! I simply don’t know what you mean!’ She wouldn’t give up. He couldn’t give in. Her story was ripe for the picking—and so was she.

‘No, Detective!’ said Cookie. ‘You think I’ve made up some juicy story? There’s only one thing that’s juicy in this kitchen, Detective, and I think you know what I mean.’ She fixed him with a meaningful stare.

Stiffwood tore his eyes away and composed himself; when he spoke, his tone was drier than a glass of Vermouth. ‘You’re skimping on supplies,’ he said, ‘and that adds up about as well as a baker’s dozen. Because if there’s one thing I know about Basil L’Aperitif’s daughter, it’s that she wouldn’t be scraping the bottom of the jam jar for grocery money.’

‘Detective! I’m just being thrifty, is all, until I get my inheritance. I don’t want to put all my eggs in one basket.’

Her response was as false as a maitre’d’s welcome. ‘Ms L’Aperitif,’ said Stiffwood, ‘that’s half-baked, and you know it. You’ve had more cheddar than a fondue since the day you were born, and now you’ve got a pantry like Mother Hubbard on war rations.’

‘Detective,’ Cookie laughed, ‘of course I’m rich—rolling in it like we’re about to roll out this dough. So I simply don’t know what you’re talking about. But what I do know is that you’re just about as good enough to eat as these cookies are going to be.’

Stiffwood wasn’t fooled. She was milking the seductress role for all it was worth so he’d think she did in her own daddy, but there was no sugar-coating the truth. She was no murder suspect—and her facade was beginning to crumble.

‘Lady,’ he said, ‘your story’s undercooked. You’re bananas if you think I’ve got you down as a killer.’

‘Stop it!’ she said. ‘Stop trying to get a rise out me!’ Her face was flushed. She reached up and undid the top button of her blouse. Stiffwood’s head was spinning like a lazy susan, but he couldn’t stop now.

‘You’re lying,’ he shot back, colder than a deep box freezer. ‘I can smell it a mile off.’

His persistence was grating. Her eyes welled with tears. Her chest began heaving. She was like a kettle coming to the boil; the steam in the room was rising.

Stiffwood wasn’t wasting any more time. He swept Cookie up like she was as light as a sackful of apples and kissed her, kissed her with the zeal of a glutton at all-day buffet.

‘Detective!’ Cookie gasped when she finally pulled away. ‘You’ve whipped me into such a state!’

‘You can stop simmering,’ said Stiffwood, ‘and tell me the truth.’

‘OK,’ Cookie sobbed. She’d cracked at last; she wasn’t sunny side up any longer. ‘Daddy owed the mob! He wouldn’t pay up so they told him he was toast. He didn’t listen. And now …  I guess I’ve been acting like I’m one sandwich short of a picnic. I was just so scared, Detective.’ She smoothed her apron; her top button stayed undone.

She opened the refrigerator. Inside, the dough was cold, but enticing, like a blonde with a sour expression.

‘I really need some dough. And this isn’t the kind I had in mind,’ said Cookie. ‘I had to pay the mob everything Daddy left me in the will. They made me promise I’d keep quiet or they’d turn me and my brother Johnny into mincemeat. I wanted you to think I killed Daddy so they wouldn’t truss me up like a Thanksgiving turkey. I figured if I took the heat, eventually they’d leave me alone.’

Stiffwood was stewing. These guys were bad seeds—and wasn’t going to let them take Cookie’s bread and butter.

Before Stiffwood knew it, he’d spread a chopping board with flour and flattened out that dough like he had something against it. Maybe he did. He rolled it into a rectangle to show it he meant business. ‘Ms L’Aperitif,’ he said, ‘I’m going to flatten those boys like pancakes.’ And they weren’t the only ones he couldn’t wait to get his hands on.

‘Oh, Detective! You must be nuts! Lucky they’re my all-time favourite snack. ’ Cookie wiped her eyes and reapplied her lipstick. She took out yet another bowl and tossed in some sugar and cinnamon. ‘Detective … I need a firm hand for this.’

Stiffwood sprinkled the mixture over the dough and rolled it up. It was like rolling up a body inside a carpet. Suddenly, he had to get the dough out of his sight. He covered it in parchment paper and put it back in the refrigerator.

Cookie turned on the oven. She stared at Stiffwood with eyes as big as dinner plates and much better looking. ‘Thank you, Detective,’ she said. ”But be careful. There’s no smoke without fire … and you’re the only one I want to keep me warm.’

Her voice was like treacle and her figure like fine-bone china. This could be a recipe for disaster. But when there was danger and a dame on the menu, Stiffwood just couldn’t resist; and this dame was the icing on the investigation cake.

The oven was ready. Stiffwood hacked the dough into slices and spread the slices on a baking tray. They looked back at him, as implacable as a row of well-trained butlers.

‘Ms L’Aperitif,’ Stiffwood said, ‘I could chew the fat all night, but it looks like I’ve got some trouble to stir up. I’m on the case.’

‘Oh, Detective!’ she said as she showed him to the door. ‘Be careful! I’ll save you some treats … don’t spoil your appetite.’

Stiffwood would sniff out those crooks like a blindfolded sommelier in a cellar full of cheap champagne. Cookie would have her cake—and she would eat it, too. But justice, like revenge, was a dish best served cold. Back in his office, Stiffwood poured himself a glass of Four Roses—the real deal, this time—and lit another Camel. They tasted better than any cookie ever would … but Cookie would be the sweetest taste of all.

Minty McGee needs a stiff drink, she needs a pack of Virginia Slims, she needs a decent man. The first two are easy; the third is about as hard to find as a private dick with a conscience and a house in the country. Minty’s a dame who makes a dime writing crime romance, but she’s damned if she can solve the eternal mysteries of the human heart. She once had a fling with Detective Philip Marlowe, but she’d prefer it if you didn’t bring that up.

She is also the alter-ego of Carody Culver, who resides in digital form at www.carodyculver.com.