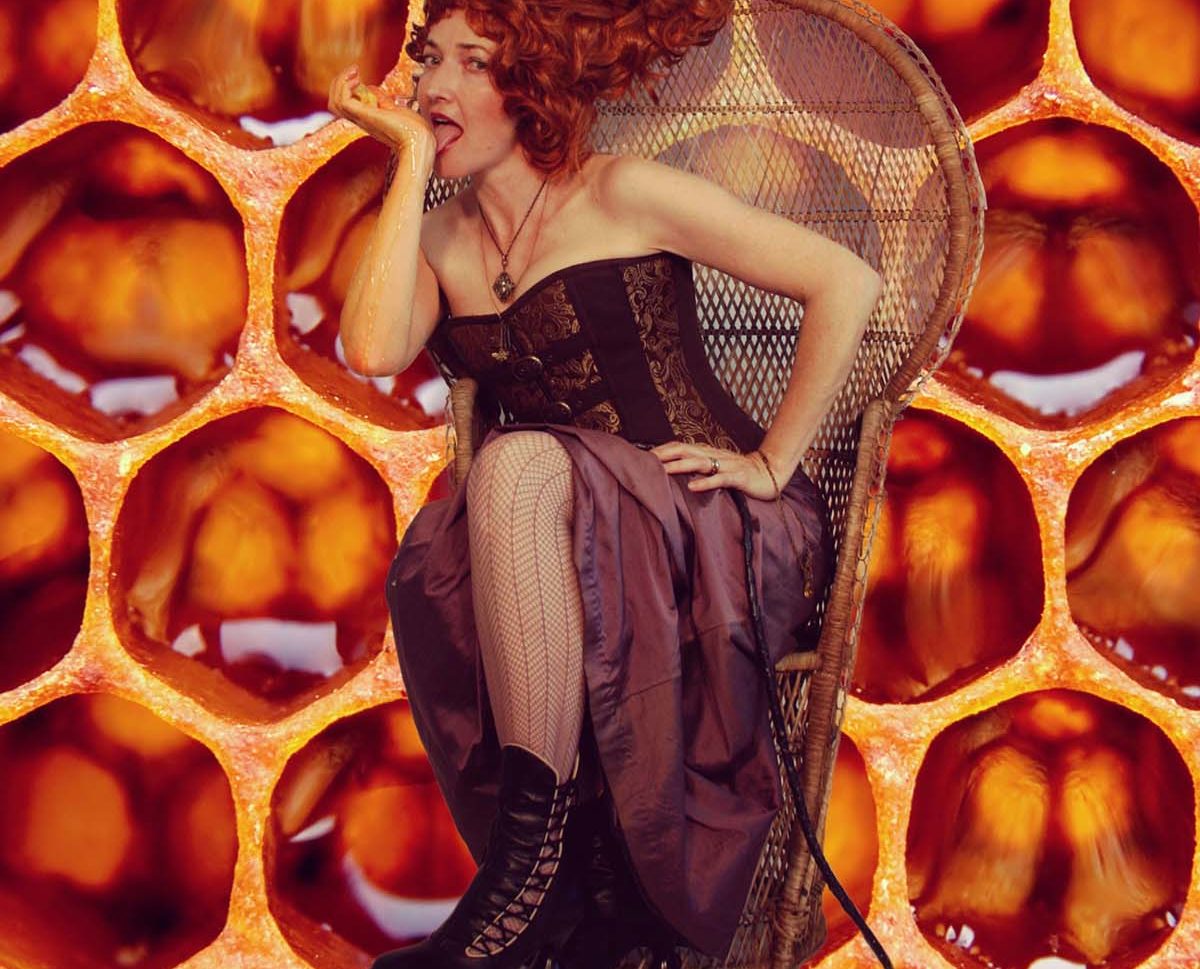 Regina woke filled with the wild, terrible longing her sisters had whispered to her while she lay sleeping. The buzz of their conversation stopped suddenly as she swept aside the gauze curtain separating her chamber from theirs.

One of her sisters, small and insignificant next to Regina, stepped forward and tremulously placed a hand on Regina’s stomach. Others followed, stroking her belly and thighs, causing the longing to grow in fervour. Regina began to tremble, and when her sisters put their mouths to her body, she could take it no longer. She shook them off and turned wildly on the spot. She felt hemmed in, trapped by their adulation. She wanted something more than this sorority.

Ravaged by the longing she couldn’t name, Regina’s huge, limpid eyes swept the room until they stuck, like a broom in a puddle of honey, on a handsome stranger in this women’s space. Perhaps he was the one with the implement to fill her aching gap? She started towards him, but three of her sisters, seeing a man in their holiest of places, roared into brutal action. His head fell at Regina’s feet, its proud gaze still locked with hers.

Rage coursed through Regina’s magnificent body. She unsheathed her dagger and her sisters trembled and fell to their knees. Before they could beg for forgiveness, she had speared the insolent three. She hadn’t known herself capable of such brutality, but as she pulled her dagger from the last of them, she realised that this was the sign the others had been waiting for. They began to ululate and stamp their feet. Their queen had truly arrived. She was everything they wanted. Strong, resolved, determined and beautiful beyond compare. They cleared a path for her and she held her head high as she swept along it.

A breeze ruffled her hair and she took her first breath of the delicious outside air. It carried scents of jasmine and magnolia and it was all she could do not to swoon as the perfume billowed towards her.

Her warrior sisters knelt at the gates. Their jackets bristled and their daggers shone as they pledged their loyalty. Regina ran her hands over the rows of heads and the warriors swayed at her touch, their hearts pounding. She selected the five strongest women to form her bodyguard and announced her intention to fly to the mating grounds. Before the words issued from her lips, she’d been unaware there even was such a place. But now, it seemed she’d been born with the knowledge: this longing had a name and there was a place for it to come to fruition.

Her entire body thrilled and trembled at the thought as she took to the fragrant air with her bodyguard. Nearing the mating ground, Regina gasped and then laughed out loud at the thought of that pathetic male she’d almost wasted herself on. In front of her was a parade of them, all stronger and more handsome than the one she’d seen outside her boudoir. These specimens vied for her attention. They jousted with each other, showing off their defined muscles and parading their finery. They leapt and called, each bowing deeper than the last. It was delicious and overwhelming. How could she possibly choose?

She decided upon a game of chase. As she was taller and more powerful than any of the males, she knew that whoever caught her first would be the strongest, the most agile and the quickest. Regina sped away. Behind her, hundreds of males panted to catch up, the weakest quickly falling behind. Soon there were only a dozen left and then just four as she climbed higher and higher. She longed to stop and let herself be mounted, but she didn’t want to accept anything but the best. To get the best, she must put up good competition, and so, much as she wanted to be pumped full, she continued to flee.

When finally there was just one male, his gaze fixed longingly on her wasp-like waist and the ripe swell of her hips, Regina decided it was time. Her loins throbbed as she slowed down a fraction and let him reach her.

Looking at her fervently, he fell to one knee and began the proposal speech she was sure he’d practised a thousand times. But the longing in Regina left no time for such pleasantries. She cut him off with the demand that he stop talking and mount her NOW. He lost no time in obeying the royal command.

An ecstasy she’d never felt before filled Regina, and waves of pleasure crashed through her body. The male began to quiver and ejaculate, but Regina wanted more. She urged him on, and when she felt him start to withdraw, she began to contract her powerful muscles. Stronger and stronger, the contractions drew him deeper inside her. He cried out in pain, but she was oblivious. There was a wrenching, tearing sound, and the male fell to the ground. Regina glanced down and saw the ugly wound where his penis had been. She felt between her legs and realised that it was still inside her, plugging her deeply and continuing this ecstasy. She smiled, sated at last.The new queen’s return home was triumphant. The mating had been successful. She had not just the penis, but also the complete testes—and that meant she could draw out the sperm, as she needed them, for the rest of her life. The hive buzzed with activity as she began her task of laying the eggs that were the colony’s future.

Honey Golightly is a practising bee whisperer. She graduated from murmuring classes to become a whisperer at the tender age of twelve. Since then her murmurings, mouthing, and whispers have been in hot demand.

If you’d like to sample her golden nectar, Katherine Lyall-Watson is her preferred distributor.