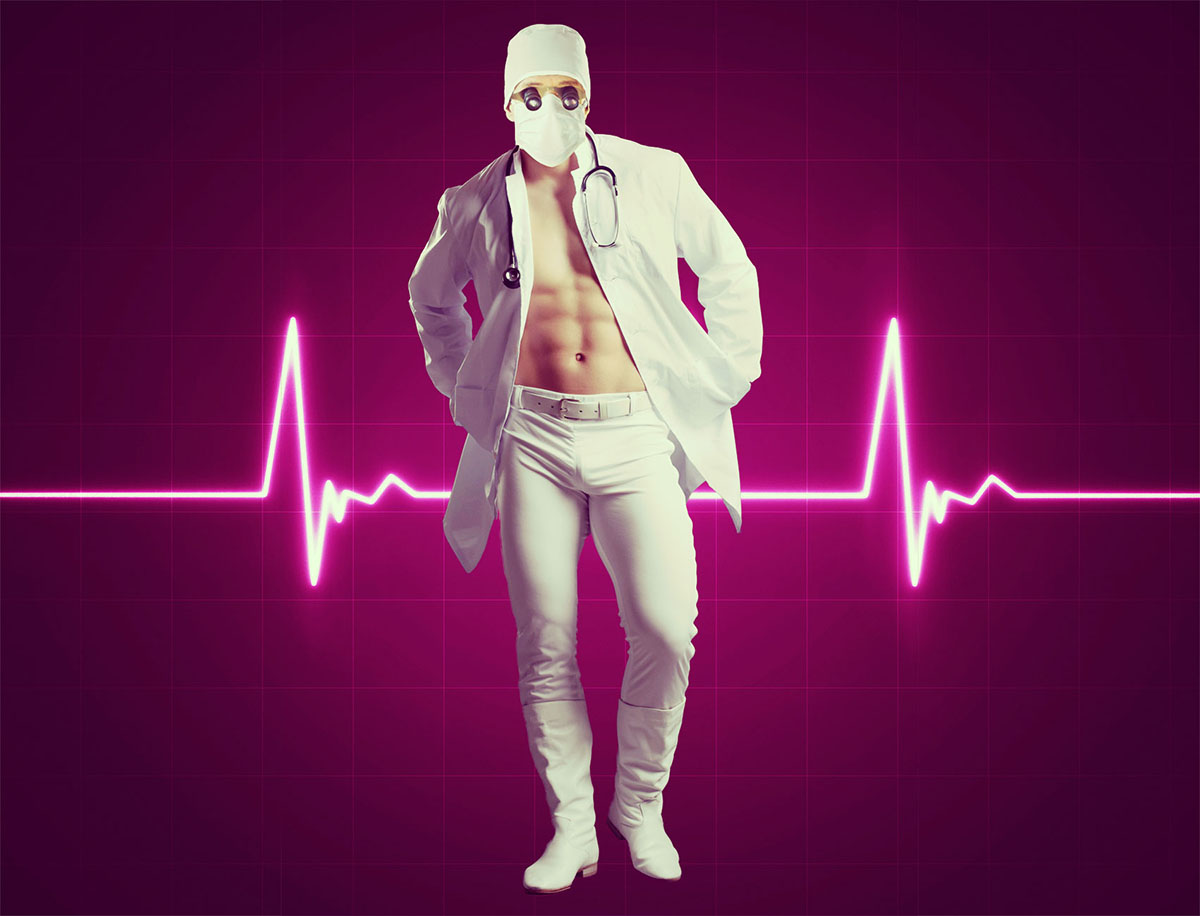 As Doctor Kurtz, most brilliant surgeon in St Valentine’s Hospital for Susceptible Hearts, pumped away manfully at the patient with his strong yet sensitive hands spread over the chest, Leona marvelled once more at his dedication and repressed the unworthy wish that it could be her lying beneath him.

‘Is this how you repay my efforts? I forbid you to die!’

Sighing her admiration, Leona darted in to mop sweat from his noble features as he pounded, cursed, and repeatedly shocked the body with electricity.

‘Increase to 5000 volts! More adrenaline! Bite his toes! He isn’t getting away from me!’

‘Et tu, Nurse Quitter?’ the handsome healer snarled. ‘Go, then. Abandon me, like all the others.’

Stung, Leona bit back tears. ‘Never,’ she breathed. For three days and nights as the other surgeons and nurses had melted away, she had stood by his side at the operating table while he laboured futilely to resuscitate—delightedly, proudly, and with a forlorn hope that perhaps now the magnificent, maddening man would notice her existence.

‘I tell you this patient is merely malingering!’ A slight frown marred his otherwise flawless brow as Doctor Kurtz’s pumping hands suddenly broke through the rotting sternum and were plunged wrist-deep into the chest cavity. ‘Although if he doesn’t snap out of it soon, I cannot be answerable for the consequences,’ he muttered.

‘Leave it, Kurtz, this is no longer billable.’ Doctor Helmsley the supercilious hospital administrator had entered, wearing his perpetual sneer. ‘I’m calling it.’

A tremendous sigh shook the doctor’s heroic frame as he reluctantly ceased his efforts.

‘As for you, Nurse Winsome,’ Helmsley’s tone was scathing, ‘an operating theatre is no place for tossing lustrous hyacinthine curls.’

Flustered, Leona’s hands flew to her head—her hair had sprung free of her cap somewhere in their exertions.

‘Get out of here, you foul slug!’ Kurtz bellowed, charging at the bureaucrat with an upraised fist. ‘If you knew what that nurse has gone through for me—’

‘No, Doctor!’ Though a thrill went through her at his chivalrous defence, Leona blanched at the thought of the repercussions and nimbly interposed herself between them—just in time for Kurtz’s flung fist to catch her on the point of her pretty chin and send her flying to the floor.

‘Common assault, Kurtz, another mark against you.’ Helmsley’s serpent smile was triumphant. ‘Not that I need it now—I know all about your past.’ He exited, chuckling nastily.

Kurtz helped Leona to her feet; she trembled in his arms. They were mighty and broad at the biceps yet tapered to slender and delicate fingers, a bit like tree branches, only more manly and with no leaves.

‘Are you all right?’

‘You little fool!’ he yelled, shaking her so violently her teeth rattled. ‘I don’t need your protection—or anyone’s!’

He suddenly paused, gazing deep into her cornflower eyes. Leona tensed and quivered in his grasp.

‘Your eyes,’ he murmured thoughtfully, peering into them intently. ‘I never noticed them before. They …’

‘They have a slight strabismus. Radical brain surgery could cure it with minor loss of motor function. I’ll give you a discount if you’re interested.’ He let her go and paced back to brood over the lost patient, wrinkling his rugged yet compassionate nose a bit at the smell.

‘What—what did he mean about—?’

Kurtz laughed harshly and drove a rueful hand through his unruly black locks. ‘I suspect he has discovered what happened at my last hospital. I performed a … certain operation that society has chosen to disapprove of.’

She caught her breath. ‘You mean—’

‘Yes, you have guessed it. I grafted a giraffe’s neck onto a man’s body. History will be my judge.’ He smiled wearily. ‘All I wanted was a better world where short people are no longer disadvantaged at rock concerts. And for that I have been outcast.’

Leona fought tears and touched his arm. Where was the justice? She would stand by him—she would stand by him against all the world—Doctor Helmsley, the ethics committee, those pesky Simon Wiesenthal people with their impertinent questions about where he was during the war.

‘The fact is, the human body is badly designed. We would be better off without it.’ Musingly, he plunged his hand back into the patient’s chest and ripped out the errant heart. ‘Especially this. What is the point of it? A couple of pounds of fragile tissue. It is humiliating for the mighty human intellect to be dependent upon it just because it pumps the blood.’

‘The heart is more than just a blood-pumping organ, Doctor,’ Leona quavered faintly but firmly.

‘I hate you!’ Kurtz yelled at the heart. ‘I hate you! One day I will conquer you!’ She flinched as he squeezed it in his fist and hurled it to splatter against a wall. ‘Shall I tell you my dream, Leonarda?’ Eyes afire, he took hold of her by the shoulders and shook her again, in excitement this time. ‘Engines! Engines in place of hearts! Little two-stroke petrol engines—like the ones in lawnmowers—with a cord and a little handle sticking out of the ribcage—if the thing ever stops you simply yank to get it going again—’

She nodded, head whirling, inwardly horrified. But what of love? she whispered wordlessly in the depths of her own fragile heart.

Kurtz scowled. ‘Now that brave new world will never happen. Here I had hoped to find a volunteer to be the first to be fitted with the two-stroke petrol heart—although I suppose I was always unlikely to find someone noble enough to take the risk among all these sickly weaklings.’

Everything in her recoiled—but she summoned her resolution.

Timidly, she laid a hand on his sleeve. ‘I will do it—if you think I am worthy.’

He stared in surprise, firm but elegant eyebrows knitting.

‘You, Leopolda? You would do that for me? But—I couldn’t possibly use you as a test subject!’ He rubbed his strong yet tender jaw, pensive. ‘Unless you sign a consent form absolving me of all responsibility.’

A scant hour later Leona had her wish, if not quite in the way she had envisaged it, lying naked and disinfected on the table beneath his capable hands. Why should she quail so? Perhaps she would be better off without a heart anyway. The ugly lawnmower engine waiting on the trolley would never develop ideas above its station …

Efficiently he injected the local anaesthetic; as she must serve as his theatre nurse as well as his guinea pig, she would be conscious throughout the pioneering operation.

‘I never noticed them before. Strange things when you consider them, aren’t they? Some arrangement of chrome and nozzles like an espresso machine would be far more functional.’ He prodded them curiously a moment then brusquely moved them out of the way; he had developed a technique of raising the whole ribcage like a car bonnet, and Leona found her perky pink breasts pressed against her chin.

He bent to the exposed thoracic cavity with scalpel poised—then suddenly stopped, frowning, and glanced in puzzlement at the beeping cardiogram machine. He stepped back, reached forward again, paused and checked the monitor again. ‘I’ll be damned,’ he muttered. He abruptly turned and paced off across the theatre, then came dashing back. The ECG went wild. He sauntered off to a corner of the room whistling casually and then, to her bafflement, came sneaking back towards her on hands and knees before popping up over her chest—with the same result.

‘This heart—beats faster—whenever I approach it!’ he exclaimed in mystification.

Tears streamed down her averted face. ‘Because, Doctor Dunce, the heart belongs to you!’ she sobbed.

He stared towards her in wonder. Then, with three deft slashes, he severed the heart of its mooring and raised it to his eyes. It beat wildly in his hands like a trapped bird. He glanced from it to the waiting petrol engine and then, with a quick decision, kissed the heart and duct-taped it back in her chest.

Placing his hands on her perky but numb and upended breasts, he slammed her sternum shut decisively.

‘I have been a blind fool,’ he said quietly. ‘Leandra—can you ever forgive me? The cure for all ailments has been right under my eyes all along.’

‘Yes!’ He pulled her upright and kissed her fervently. ‘Marry me! Let us leave this place together! We will go and work among the natives of the Amazon jungle—we can operate on them with no-one to interfere—together we will build a master-race of indestructible cyborg giraffe-people with coffee-machine breasts—but loving human hearts.’

And as he crushed her in his arms, the crescendo of the cardiogram beeped out her heart’s wild song of joy for all the world to hear.

Lobelia Quest published her first novel, ‘The Lady and the Boot Boy’, at age 16, winning praise for its originality of grammar and freshness of vision, with one critic remarking, ‘I will never again be able to look at a rotary shoe-polisher without blushing.’ Since then she has worked in a variety of genres and styles—’each song creates the singer anew’—and has twice won the Silver Vulva at the Montreux Passionate Writing Festival. Her advice to aspirant writers is stern: ‘One has to give and give to one’s readers and then give some more until it hurts … One cannot be a slave to the dictionary. One has to transcend it. Often one must voyage far beyond the right word in order to land on the really surprising one.’ To get into the mood, Miss Quest usually works naked apart from a rope of pearls and a dab of Givenchy. This may make it easier to apply her patented ‘nipple test’ to each line of prose: ‘Nipples are nature’s own early-warning system for boredom. Slack nipples mean slack writing. When the writing is taut, quivering, and threatening to gush just a little bit, so are my bosom-antennae.’

Nowadays, Ms Quest prefers to dictate her opuses to a series of eager and obliging male secretaries. Her current amanuensis is Michael Kelly, a British humourist otherwise best known as impresario to the fetish-fiction king Ulrich Haarburste.