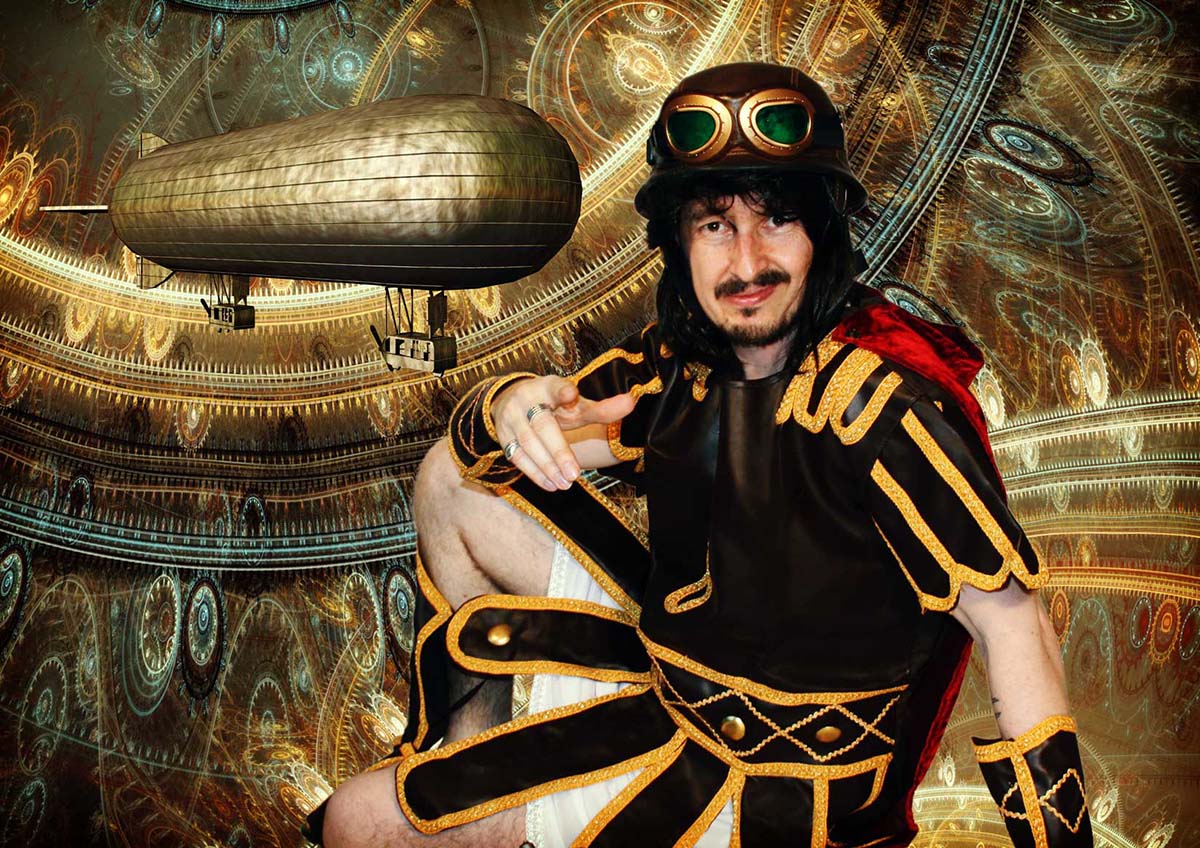 She knew she was being hunted, but by whom?

From the cockpit of the Sanguine Mistress, Lady Fancy Bunting, Inventor Industrialist, took in her hunter’s remarkable girth. She had never before seen such a rigid dirigible as that which hurtled towards her. It thrust itself through the naked sky with the unbridled force and majesty of Empire, and drew down on her more delicate airship with a swift and obdurate certainty.

The Sanguine Mistress, spry as she was, was no match for such a powerful machine.

Lady Bunting turned her brass spyglass on the predator. Her gaze wandered along its curved length. She marvelled at nacelles that hung heavy beneath it, their engines throbbing with wanton and ferocious energies. And there, along the ridged prow of the rigid airship, was the purple crest of the Whiteshafts.

‘Of course; who else could it be?’ she said. Her heart quickened with excitement and dismay.

Lord Moriarty Whiteshaft, Inventor, Peer of the Realm, was a man as charming as he was deadly, and ever had he and Lady Bunting been foes. But surely he would not be so brazen as to board her! Already his long airship was coming up beside the Sanguine Mistress.

And there he was leaning from the open docking bay, his long, dark locks flowing in the wind, his even darker eyes penetrating her with his hawkish gaze. ‘Prepare to be boarded, Lady Bunting,’ he called, his great hands cupped around his full mouth.

‘I would rather that you didn’t,’ Lady Bunting hailed back.

But it was too late. Lord Whiteshaft had leapt onto her ship, and tied her to his. His full lips folded into the most arousing of smiles.

‘I must warn you, I am armed,’ Lady Bunting said, her pistol already in her hand.

If Lord Whiteshaft was dismayed, he did not reveal it. ‘I can be most disarming.’

Lady Bunting cocked her pistol. ‘Should we find out?’

‘Lady Bunting, I am a gentleman. Let me assure you, you will come to no harm. I swear it.’ He lay one hand upon his broad chest; his eyes softened.

‘Would you accompany me to my rigid airship, the Tawdry Demeanour?’

‘And leave the Sanguine Mistress unpiloted?’

‘Fear not, she will be docked. My craft is piloted by automatons of my own invention. Already, the docking shaft has been deployed. Trust me, she is well fitted out. You won’t believe the spread I have prepared.’

‘I have never said no to a free meal,’ Lady Bunting said, though this time she suspected the meal would come at no small cost.

The Automatons, mechanical men powered by clockwork mechanisms of truly intricate craft and design, could also cook nearly as well as a woman. The meal, served by the open window of a grand dining hall, on plates of silver and platinum, was truly opulent.

Afterwards, the plates removed, Lady Bunting and Lord Whiteshaft took in the view.

She turned to the left.

‘I meant the drink.’

‘Yes,’ she said, never having said no to a free drink, though she suspected this drink would come with a cost.

He whistled once and the Automatons arrived.

The port was delicious, and Lord Whiteshaft made a toast to Queen and Country, and the expansion of that great Empire across earth and sea. And then he regarded Lady Bunting with eyes of pure heat, and reason: the eyes of a scientist‒lover, a man who might almost match her own passions. The floor beneath them throbbed with the thunder of pistons pumping furiously. The heat of the engines passed into their flesh, and the world held its breath—for surely some new and momentous destiny was at hand.

‘It is a lonely life we lead, as Heads of Industry, and Men and Women of Science. And that life has led me to darkness. I have a confession to make,’ Lord Whiteshaft said.

‘I came here to kill you, for always have we been opponents, in court, and in the halls of science. But now, now, looking true and nakedly upon you, I realise the sheer and tormenting error of my ways.’ He dropped to one knee by the open window, his long hair blowing sinuously around his head and his great chest heaving with pure affection. Lady Bunting could feel the fire of him, the musk of his ardour and the bright wild joy of his intelligence. She breathed in deep, and waited. ‘Would you do me the honour of accepting, what I mean to say, is I would be most, I mean ‒ ‘

‘Out with it, man!’ Lady Bunting said.

‘But I hardly know you.’ He fumbled with his breeches.

‘I mean, ask your damnable question!’

‘Would you marry me, Lady Bunting? Would you become my Lady Whiteshaft?’

She kicked him hard, in the chest, and he tumbled from the window.

‘No, Lord Whiteshaft, I would not,’ she said.

She watched him fall at approximately 176 feet per second. Until the parachute deployed, as she knew it would, for Lord Whiteshaft was no fool.

It turned out they made very good tea as well, and Lady Bunting was never one to say no to a free cup of tea, or a free airship and Automatons, for that matter.

And, even if it did come with a cost, it would not be one she paid today—which, as the wise men say, is almost as good as never paying it at all.

Jasper de Steel is a man of few limitations, and even fewer inhibitions. Some say he was raised by wolves; others that he raised himself using a parenting device of his own conception. One thing is certain, only his typewriter can tame him, and it is nearly out of ribbon.

He is also the alter-ego of Trent Jamieson, who resides in digital form at www.trentjamieson.com.au.