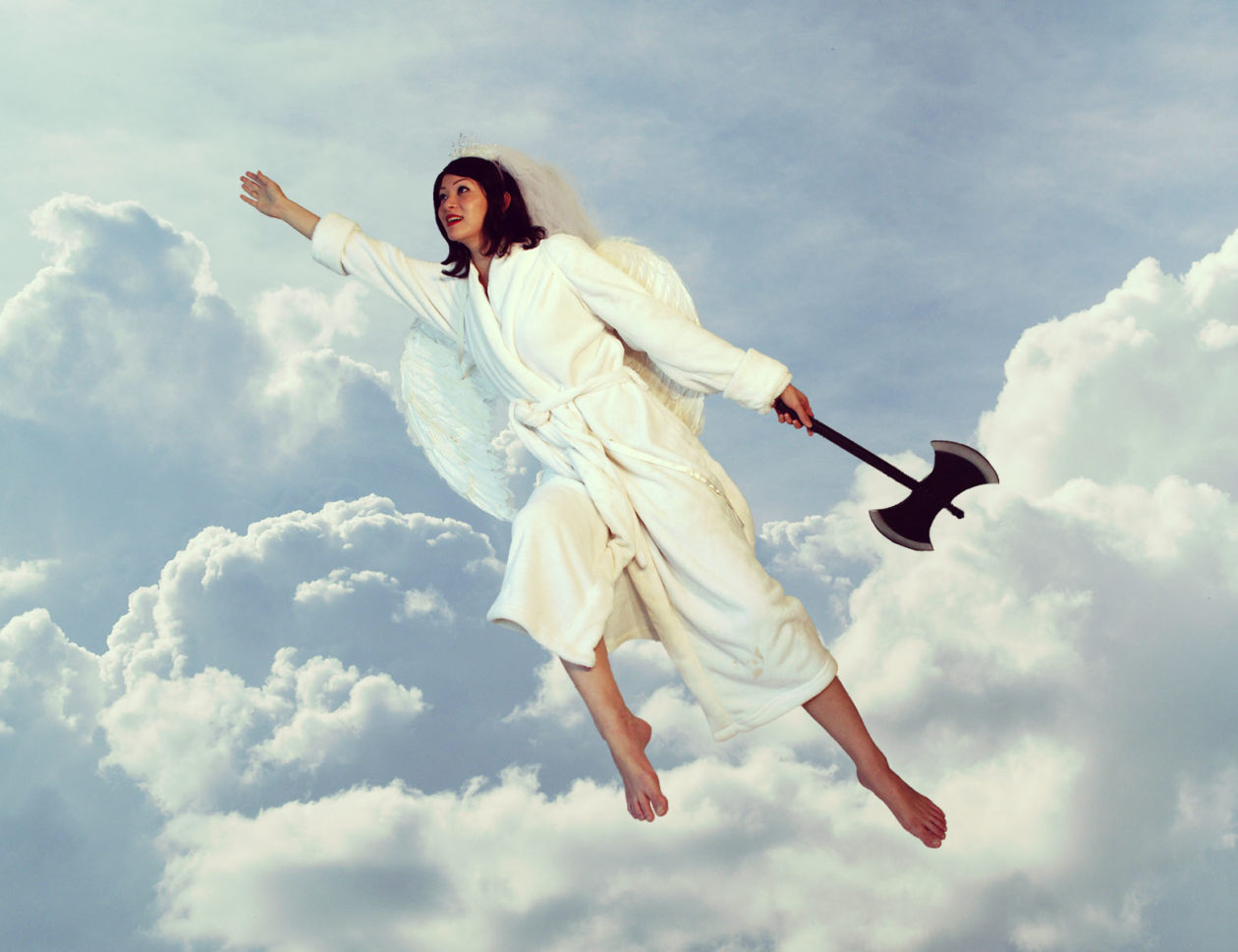 Angelika woke slowly and sensuously, twisting her porcelain limbs gracefully towards the heavens like a baked pretzel.

‘Good lord,’ she yawned, brushing the sleep from her calf’s eyes. ‘Where could I be?’

In one divine motion, she swept the angel-hair-pasta-coloured hair from her bare shoulders, the gold tendrils cascading to the ground. Angelika released a chaste yet wanton laugh upon realising that she’d been disrobed on her journey to this mystery location. She now lay, rather overheated, inside a bearskin, her come hither curves ensconced within a lifeless yet sexually commanding fur suit. She moaned softly; her halo throbbed. But what of her wings? She turned drastically, disturbing the smoky air around her. Soon her calf’s eyes adjusted to the low light and she gasped at the sultry scene before her.

At her feet lay a platter of various cheeses half melted from the roaring fire and a decanter of ruby red wine. A pine tree, freshly logged that morning, stood erect before the hearth, announcing what was to be a really great Christmas. The bitter smell of smoked game soaked the air. So too, did the low song of the hulking, shirtless figure sitting before her.

‘Who goes there?’ cooed Angelika.

Duke Pound leaned toward the flames so that Angelika could peruse his features. His was a stately face, with a jaw as angular as if carved from stone and eyebrows tightly knitted from uninterrupted decades of brooding.

Duke leaned backwards on the whittling stool he’d whittled himself, gruffly whittling Angelika’s broken wings. Not a stray feather fell to the cabin floor; Duke was skilled with his hands—devilishly so. Angelika observed Duke with her calf’s eyes, drinking in the suntanned brick shithouse of Duke’s body, feeling positively thrilled at the unexpected fluttering of her own heart.

‘Good sir,’ said Angelika, suddenly breathless, ‘I appreciate your saving me, but I must go.’

‘Stay,’ boomed Duke, his deltoids rippling with such force that his deer hide suspenders exploded from his chest. ‘You’ve worked yourself into a state of exhaustion. It would be irresponsible for me to let you leave in this condition.’

‘I am a messenger sent from God to warn humans against temptation,’ said Angelika, stepping forth from the bear’s skin, causing it to flop to the floor like a burlap sack. Her naked body was blindingly beautiful. Duke averted his gaze, the hologram of Angelika’s breasts flashing behind his eye sockets like a pair of twin moons. ‘And so I must leave. If you could direct me to the townsfolk, I would be forever grateful.’

His suspicions were true then: she was a fallen angel. And yet she was still a woman—he’d seen that when he bathed her in the babbling brook, could barely contain himself despite the blood-heavy anvil throbbing between his thighs and pounding into various household objects as he delivered her hurriedly to his bunk.

‘Yes. You must carry on,’ frowned Duke bitterly, running his fingers over the feathers of Angelika’s mended wings. They dampened from his touch—not from his sweaty palms, but from some other ungodly source. Angelika stifled a low moan.

‘What is your name, angel?’

‘It is Angel. Short for Angelika,’ said Angelika.

‘Well, Angel. My name is Duke Pound. I lead a simple yet sensual existence alone in this forest, but I am a man of principle. I give you my word that I will restore your wings and then guide you to the village.’

Angelika was conflicted. Banished from heaven for her spellbinding beauty, which some considered the work of witchcraft, Angelika was determined to succeed in her mission. No angel was ever more virtuous, more virginal. And yet …

Duke had found Angelika asleep in the sun-dappled forest, her silken robe and wings scattered around her in pieces, blown apart from the impact as she hurtled towards earth like a flaming asteroid. She lay nude, her skin glistening with essential oils and gold glitter: angel’s blood. Duke had encountered few maidens in his lifetime. The illegitimate child of an illegitimate duke and the village pastor’s wife, Duke was abandoned in the woods at birth and raised by wolves. Besides a few chance encounters with wood sprites, he was mostly left to his own devices, which he used prolifically. Every surface of the forest was coated in his seed, the animals accustomed to rousing to a dewy morning that was by no means an act of mother nature.

Angelika felt Duke’s reticent yet passionate nature reflected in her calf’s eyes as she sipped whiskey with him during a brief but intense session of eye contact.

‘Merry Christmas, Angel,’ said Duke, breaking their gaze to pass Angelika her mended wings. Briefly, their fingers touched, and Duke took Angelika’s hands in his. She could no longer bear it.

‘Christ gave his body. Now I give mine,’ she ejaculated, launching herself into Duke’s arms. With great urgency, he spread her on the dining table like a Christmas ham, carving his way up her legs with splintered hands, his mouth dripping with holy spirits. Enough was enough! Angelika wrapped herself expertly around Duke’s waist, feeling his trousers taut with his resurrected member.

Using two hallowed hands, Angelika tore Duke’s britches asunder and guided his wide wood inside her forgiving embrace, gasping with sinful rapture as he set about nailing her to the cross-hatched cabin wall. Angelika knew that she loved Duke, and as he plundered her with his pike pole, she felt her pleasure and resolve take firm root. Tomorrow she would hand in her resignation. Tomorrow she would no longer be a fallen angel, but merely a fallen woman.

‘Oh come, come all ye faithful,’ roared Duke, bucking his axe, causing Angelika to ascend, higher and higher, until finally he exploded with such force that she was launched upwards into the sky.

‘JOY TO THE WORLD!’ she cried, perched atop the tree. Outside, it began to snow.

Thisbe Blaze, heiress to the Blaze Family Blazers fortune, forfeited her riches to younger brother and head seamster Hermes Blaze last spring to experience life as a commoner. Since completing online courses in puppetry and interpretative jazz, she has found great success with her hyperrealistic floral arrangements depicting famous literary hounds, which are displayed in rural libraries throughout Bristol. Despite having been proposed to over 58 times, she lives alone with her 12 male servants and Bibiana, her beloved tabby, on a tasteful yet massive country estate.