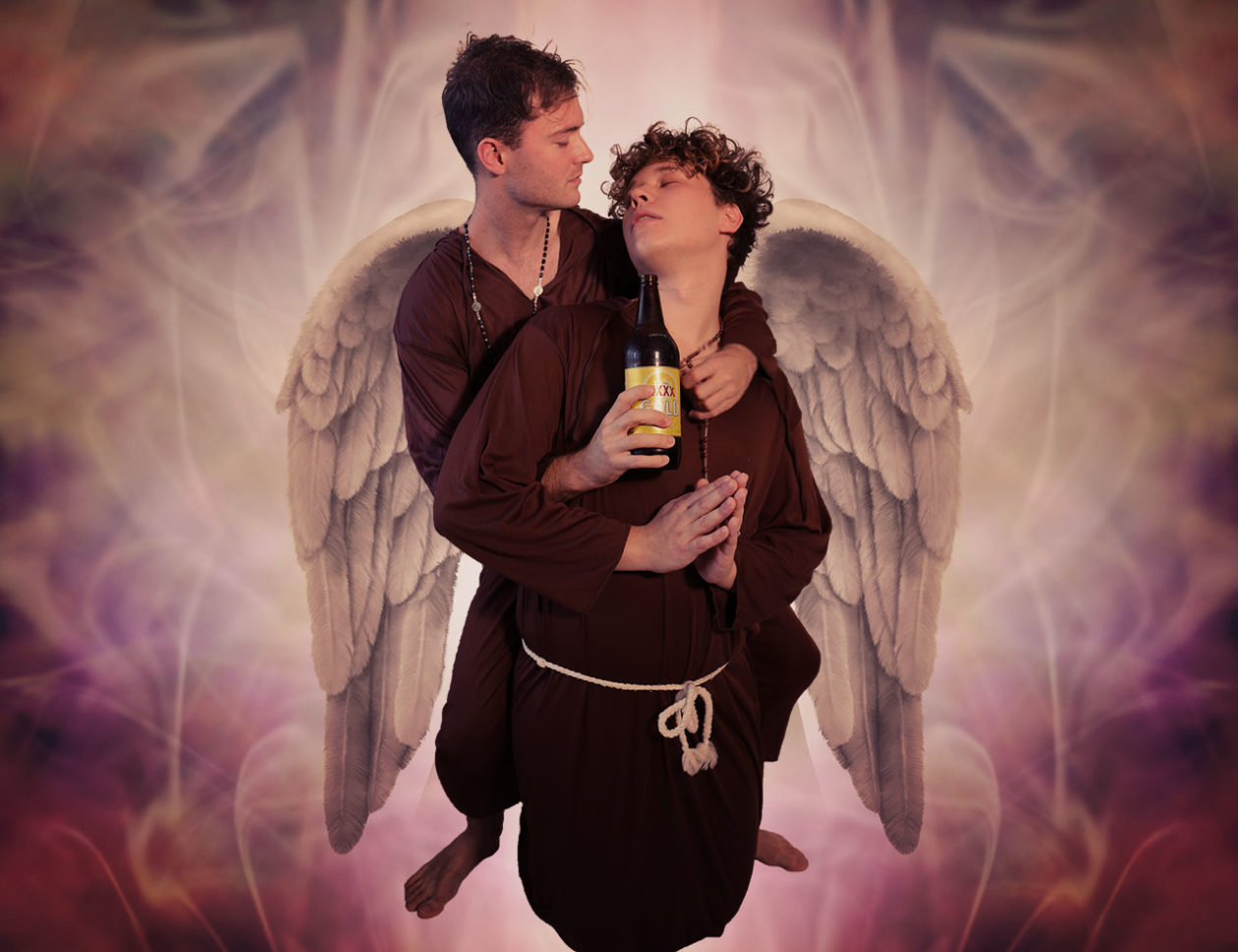 A glistening shaft penetrated the round, ridged archway, and coalesced on the comely shoulders of Brother Francesco. Outside the late day was a quadratura of tangerine and azure which had (moments ago) arrested him as he took a turn around the abbey. Its singular cirrus he now endeavoured to replicate through innovative mixtures of Saccharomyces and bacteria; through dry-hopping and double dry-hopping; and through a slow, rhythmic pump of carbon dioxide. For this he had forsworn society and the touch of women, gladly—not that gladly, he corrected himself, ha—so he might give himself entirely to religion.

So consumed was Brother Francesco he failed to notice his company, the slim, girlish postulant the other monks had unchristianly dubbed their ‘bitch’. This soon-to-be Brother Sebastien stood agape by the entrance to the brewery, for in the heat Brother Francesco had removed his cassock and was stripped to the waist—and my, Sebastien thought, what a waste it was. He imagined how the village girls must long for Francesco’s hirsute bulk, muscled with some appealing paunch above the loincloth, lowering towards them gently but with cool conviction as to what was about to happen, who was in charge here, et cetera.

‘Brother Francesco!’ he cried. The older monk turned to him irritably, and Sebastien folded his hands in demure, upside-down prayer. He felt the familiar stirring that so often beset him in the presence of stern male authority—the same feeling that had inspired him to take the cloth.

‘Father Angelo has fallen ill,’ he explained, attempting to cover his perceptibly rising vestment. ‘Plague. He will not last the night.’

‘Heavenly Father,’ Brother Francesco intoned, ‘We pray You take our brother Angelo into Your bosom.’ Seizing Sebastien by his locks, he wrenched him to his own avuncular breast to demonstrate. ‘We pray You lift him from his bed, and hold him tenderly in Your embrace, and with Your Holy Spirit, fill him.’

‘That’s not all.’ Brother Francesco frowned. ‘We pray You forgive him his sins. For who among us is not a sinner? What do some missteps matter if mostly the path one walked was just?’

Of this Sebastien was not convinced and distractedly fingered his rosary beads. But Brother Francesco seemed really upset about Father Angelo, which made Sebastien want to like Father Angelo more. He prayed.

After six hours, during which Brother Francesco rose occasionally to attend to his saison, a moribund symphony of bells disrupted the abbey’s sepulchral calm.

‘It’s a Semi-Sour Dry-Hopped New England IPA,’ he said, then poured one on the flagstones in honour of the dead abbot. Sebastien opened his own bottle, which frothed mightily, the contents gushing skyward like the steeple of the church in the nearby parish, Bell End. Wetly and whitely it coursed over Sebastien’s face.

Seeing Sebastien was sopping, Brother Francesco took the young monk’s wrist and unselfconsciously licked the flat blade of his hand.

Still holding him, Brother Francesco asked if Sebastien had something in his eye. ‘You keep blinking,’ he remarked.

Forsooth Sebastien had been fluttering his eyelashes; he had seen prostitutes do this in the village, something he’d lied about in his monk interview. Desperate to maintain Brother Francesco’s attention, Sebastien cast wildly for something they could talk about, monk to monk, mano a mano.

‘If you could make the perfect beer,’ he squeaked, ‘What would it taste like?’

Brother Francesco smiled. ‘It’d be beer that tastes like real beer,’ he mused. ‘With a hint of pomegranate. Not too hoppy, but with a mild oak. It’d be the colour of sunset, so smooth that when it filled your mouth you wouldn’t need to swallow; it would evanesce.’

‘Nothing!’ he ejaculated hotly. ‘I said, uh, instruct me. Instruct me … how to brew beer.’

Brother Francesco cocked his head. ‘Are you sure?’ he asked. ‘The brewer’s path is lonely. The other monks, they look down on us. They transcribe the Bible in their fancy handwriting, or flog themselves all day.’

Sebastien thought that if he didn’t flog himself soon he would die.

‘If you ask me,’ Brother Francesco continued, clasping Sebastien’s forearm and speaking in a secretive voice, ‘It’s because they resent us. They resent our freedom. Our creativity! Our …’—and at this he stroked Sebastien’s lovely, darkening cheek—‘… vibes. We’re doing the only thing that comes close to the perfection of God.’

Winking, he touched his bottle to Sebastien’s.

‘Haven’t had any complaints!’

Ella Quince is a Brisbane-based writer and illustrator best known for her portrait series Use It or Louche It: Proletariat Urban Watercolours and High-Contrast Masculinities,for which she was awarded the 2018 Skewiff Prize.

A familiar sight around the McWhirters Building and the Queen Street Mall, her ubiquitous presence has led some to characterise her as a ghost. In 2020 she will publish her memoir with Unapologetic Press, SinVisible: Performing Perversion in Public for Profit, which was described by the judges of the Dongle Award for an Unpunished Manuscript as ‘Impactful’ and ‘Finished’. She identifies as sophisticated.

For marketing and promotional purposes Ms Quince keeps a boy by the name of Myles McGuire.