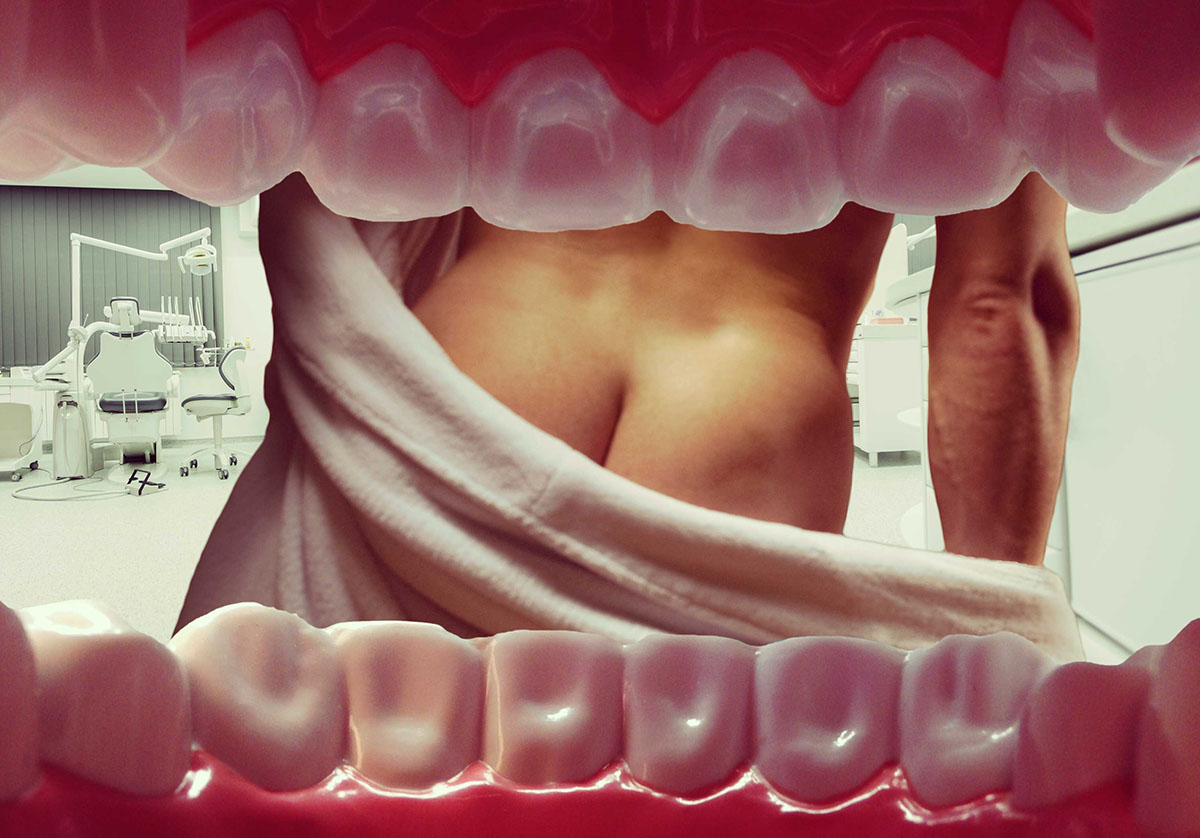 It had been thirty days since Blanche’s last visit. She’d been seeing Dr Fillmore monthly for what was proving to be a nerve-wrenching reconstruction of her best feature—her smile. Unsavoury gobbling had led to a dental dilemma: she could either plug up her holes—the equivalent of filling an Aero Bar—or have her teeth replaced. Everyone had said that reconstructive specialist Dr Fillmore was a dental hygenius, but they’d failed to mention that when he was pulling her teeth, he’d be yanking her heartstrings as well. Were they twisted together in some calamitous canal of hers? If so, she was four heartstrings down and twenty-eight to go.

Oh, how she ached for the gentle probing touch of his hands in her mouth. ‘Just lay back and relax.’ But how could she? The sterile surroundings only served as a stark contrast for the animal lust that coated her tongue—which she dutifully lifted and twisted for the gloved finger that tested the firmness of molar, then canine, then incisor, then molar again—until all of her bony extrusions had been pressed and kneaded for weakness. A moan, bitten off, provoked a small frown of concentration on Dr Fillmore’s otherwise unmarred visage. Thankfully, whatever inner decay Blanche might be guilty of wasn’t visible, and the Novocaine numbed her flaming cheeks. She was determined to keep her dangerous fillings to herself.

Dr Fillmore reached for the drill. Would he crack the crust of her porcelain control? Blanche certainly hoped so, but her mind skittered away from envisioning her blackest cavities laid bare as he bored into her, and vibrations spread to her very roots. Then his fingers were plugging up her mouth as he lifted and stretched her lips to fix his pliers around a crumbling molar. Blanche stared up at him, eyes radiating trust and mouth stretched wide. But she felt rotten to the core, using this fine man to get her not-so-cheap absessive thrills.

‘Dammit, this is a slippery one,’ Dr Fillmore cursed under his breath as he reapplied pressure to the errant ivory. Blanche had had a deep impact on him. Not once had she balked from his frankly violent incursions into her darkest holes. Her cheerful acceptance of the indignity of her position and lack of gag reflex was noteworthy among the desperate masses that paraded their neglected dentition in a Mardi Gras of orthodontic despair. To chew away the countless hours spent rummaging around in people’s faces, Dr Fillmore had often flirted with the idea of Blanche, eyes cast up at him much like now, her pearly whites even and cary-free, carefully buffered behind her … but disaster! Just as he had pried the tooth loose from her tight gums, it shot down her throat!Blanche tried to gasp, but the tooth filled her windpipe, choking her! Dr Fillmore threw his pliers away, stunning his unattractive dental nurse, then smacked his mouth around Blanche’s to form a seal. Their eyes had never been so close—a crowning passion for life and love blazed across the small gap—and with a fleshy pop, the tooth was sucked into his mouth, then spat across the room. Barely had Blanche drawn a raspy breath when it was taken away by Dr Fillmore’s tongue, stopping the flow of blood from her gums and to her brain. A maelstrom of emotions and feelings, many physical, overwhelmed them both. Was this love? Was this unprofessional? To both questions, a resounding yes! But life and death danced like happy cartoon teeth around the little white room, uprooting the fear of litigation, sucking up stray flecks of self-doubt, and protecting the two stained souls locked in a kiss of sparkling perfection.