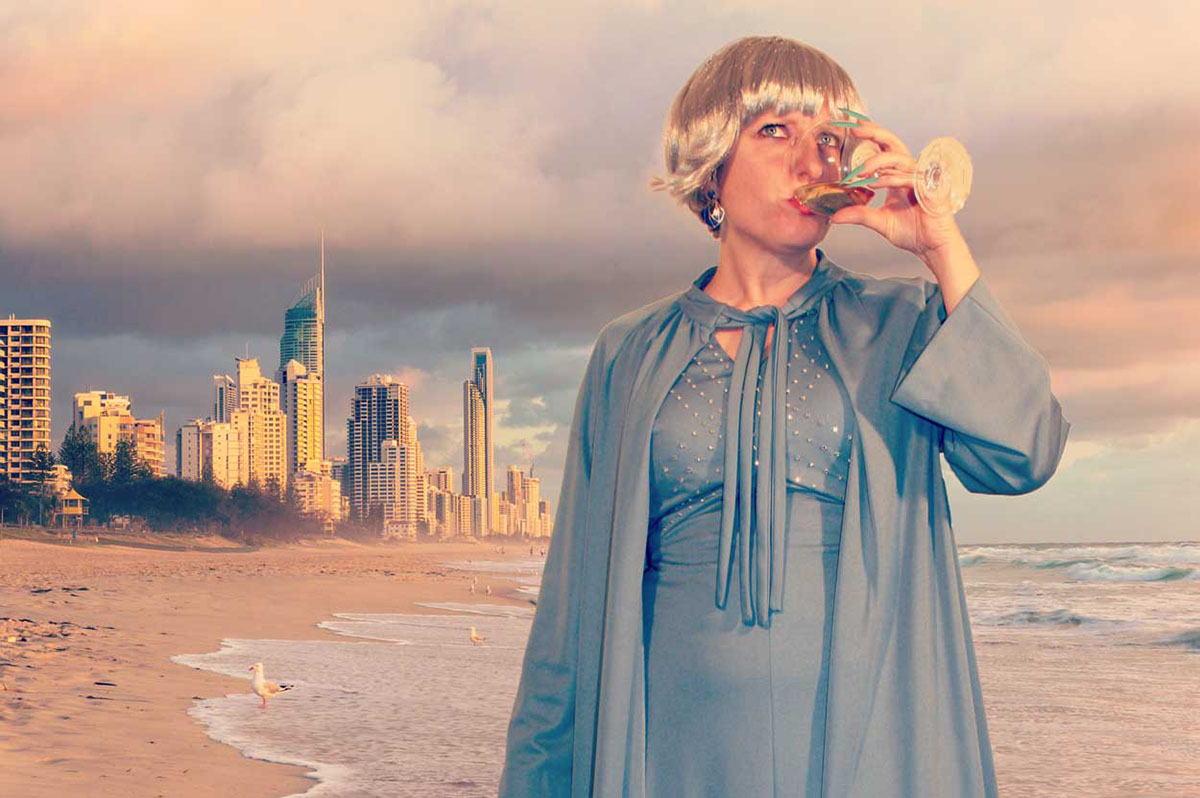 ‘NO CHRISTMAS THIS YEAR’, barked the front page headline of the Financial Review.

A svelte gentleman in a diamond border and Egyptian cotton bathrobe and cashmere silk cravat folded his newspaper and tossed it forlornly onto the summer kitchen breakfast table. He stood and ambled towards the terrace balcony.

It was the terrace balcony of a prestigious luxury penthouse in the heart of Surfers Paradise—a high-status residence with swimming pool and concierge. This five-bedroom property, situated close to the Casino, came with 120m2 of living space plus the spacious rooftop terrace of 32m2. The terrace was fitted with a jacuzzi, guest room, the already mentioned summer kitchen and a sleek bar. Boasting panoramic views overlooking the Casino and gardens, it afforded ultimate luxury, style and sophistication. Cellar and parking included.

The man: Santo Klaus, the Sydney Biennale’s latest artworld firefly, known for his abstract works on The Void, a comment on anti-physicality and the permanent state of oscillation between the speed of light and the crawl of humanity, its aspirations for elevation and inevitable gravitational plunge into the dark outer limits of anti-freedom.

The headline: a travesty.

Santo leaned his bronzed body against the balcony, gaining visual insight into the far expanses of the coastal horizon. His heart beat powerfully as he esteemed the Rothkoesque edges of his eyes’ aesthetic frame. The slow moving flecks across the blue sky, representing the birds known to the region. The white heaving foam of the waves, commenting upon the day’s rhythm.

He cast his gaze below at the collective body of the City, an extraordinary space of urbanisation and grimy reality. He searched visually beyond the established constructs of the City. Into the Paracity.

While Santo considered the insect-like behaviour of the urban wounded, he was reminded of the scene where ants emerge from a man’s hand in the seminal surrealist short film Un Chien Andalou by the Spanish director Luis Buñuel and artist Salvador Dalí. It was Buñuel’s first film and was initially released in 1929 with a limited showing at Studio des Ursulines in Paris, but became popular and ran for eight months.

‘Eight months can’t save Christmas in this anti-economy,’ thought Santo.

Soon his beloved Cassandra would be home. Christmas was his Darling’s favourite time of the year, and gift-giving one of their favourite exchanges. He had to think of something, and quick. What with the dire state of fiscal reality, he could barely cope with the idea of a negation of small sophisticated trinkets under their designer resin and petrified wood Christmas nature installation.

Santo’s hand was drawn towards his silken throat. He swallowed and could feel the swell of his Adam’s apple. He fingered the designer cravat, hand-rolled in natural, blackcurrant and khaki, 100 cm x 100 cm, dry clean only. Through his suppressed tears, he knew what he must do.

Santo, now dressed in a charcoal Tom Ford O’Connor half-lined suit with peak lapel and nary a trace of a cravat, sauntered by famous international brand stores such as Louis Vuitton, Cartier, Prada, Bally, Gucci, Fendi and Salvatore Ferragamo, into the foyer of Hermès.

His eyes swept the décor, a vibrant selection of well-collected artworks adorning the boutique.

‘I’d like to exchange this,’ he muttered to her.

Santo, up against it, had no choice.

‘Don’t you know who I am?’ he tilted his head and motioned behind the register. ‘That is my masterpiece, “The Void #19”.’

The shop assistant spun rapidly around and stopped, transfixed by the large black marble bowl, 70 cm wide and 17 cm deep.

‘Oh, Mr Klaus, we at Hermès are keen admirers of your work, which illuminates the multitude of intersections and heterogeneously coded tasks and roles in this often meaningless existence. Let me ring up an exchange for you immediately.’

Santo shut his eyes as the assistant completed the tedious and monotonous transaction.

‘Thank you for your help,’ he said warmly as he left, and added for safe measure, ‘that cravat was disgusting.’

That evening, awaiting Cassandra’s arrival, Santo studied himself in the mirror. He applied a light brush of bronzing powder in Iridescent Gold by MAC over his naked neck and décolletage.

The elevator pinged in the hallway and a svelte Cassandra, dressed in a Dolce & Gabbana velvet-collar tulip-print midi dress with lightly puffed shoulders and black grosgrain waistband fastened with a crystal-studded bow, paired with a Gucci asymmetric fur-felt wide-brim hat, finished with handmade black silk flowers and a block grosgrain bow that echoed the label’s signature Sylvie bag.

‘Darling, you look splendid!’ effused Santo as he kissed her supple cheek.

‘So do you, Darling,’ cooed Cassandra. ‘Now sit down, I have a present for you and I simply cannot wait for tomorrow!’

As the beautiful couple sat at their Jean Prouvé dining table, she handed him a familiar-looking gift bag. It was from Hermès. To his stonishment, Santo teased out of the bright orange tissue paper a natural, blackcurrant and khaki hand-rolled cashmere silk cravat.

‘It’s stunning! Exactly like the one I used to have!’ He exclaimed. ‘Now it’s your turn, Darling. I know it’s not much, but times are tougher this year—close your eyes.’

He delicately lifted another Hermès gift bag across the table, as a stork would carry a baby to its new home.

Inside the wrapping, a stunning pair of Pop H earrings in lacquer and rose gold plating, 1 cm wide by 1.5 cm tall. Cassandra gasped, then put her head in her hands.

Cassandra shook her head and said, ‘Well, it’s funny, you know. When I went to buy your cravat just now, I saw the very same beautiful earrings and thought how much they would suit me. So I bought them as well!’

They looked at each other and laughed, their voices overlapping like the collaborative artworks by Andy Warhol and Jean-Michael Basquiat, developed in the 1980s after they were introduced to each other by art dealer Bruno Bischofberger.

‘How hysterical!’ laughed Santo, ‘Who would have thought it? And at Christmas of all times!’

‘I know!’ giggled Cassandra, ‘We’ll have to wait until the Boxing Day sales to return them!’

They both continued laughing and then Cassandra proposed, ‘Shall we order up some pistachio-, mint- and spice-crusted lamb chops?’

Santo thought for a minute.

‘Mmmm, yes, but not before I completely ravish you with high-spirited lovemaking!’And this, my friends, is the heart of the Christmas Spirit. As the magi bestowed exorbitantly sophisticated gifts on a baby, so too did Santo and Cassandra give to each other. And despite the Financial Review’s doomed headline, Christmas was able to come once more.

Sylvia da Silva is a self-sufficient author who values the finer things in life, such as a licorice-scented tobacco, a well-crafted sentence, and an obedient labradoodle.

Sylvia must not be contacted directly, but may be reached through her assistant, Pascalle Burton.