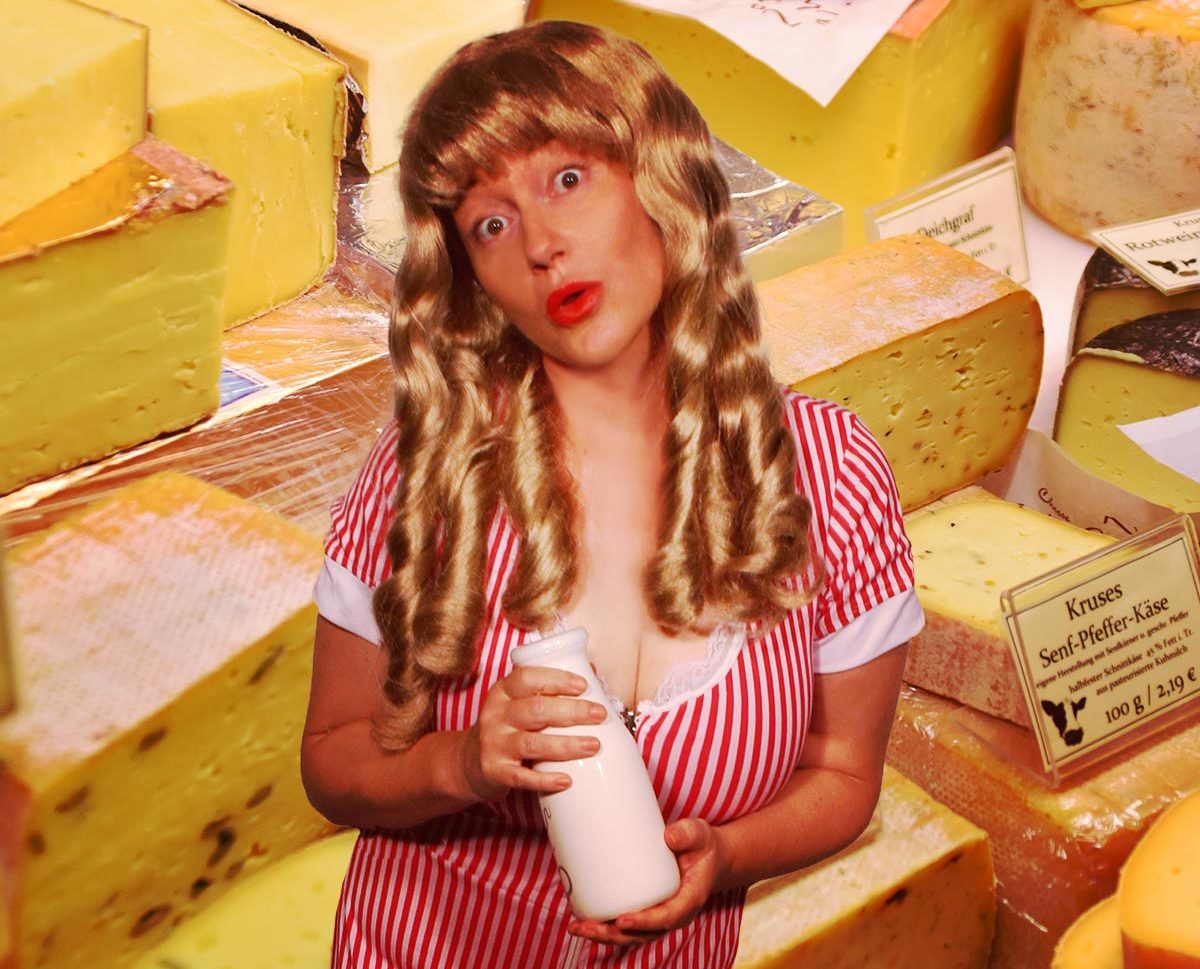 Millicent Marvel the milkmaid mooched morosely as she made the Mozzarella, wishing she were prettier. Her eyes were simply too large for her face, her lashes too long and curled, her lips too full and red. Her auburn curls tumbled in an uncontrollable mop around her white shoulders. If only she looked more like Em Ental, the bride-to-be of the once-handsome-and-kind-but-now-cruelly-transformed Lord Roquefort, heir to England’s largest cheese fortune.

Millicent plunged her milk-white hands into the basin and grasped the soft creaminess of the Stilton therein. She and Lord Roquefort had been childhood sweethearts in their younger-and-more-innocent days, and they played together in the grounds of his family’s estate—games the rules of which she now blushed to recall, of aliens-and-Munsters, hide-the-Babybel, and their favourite, Longhorn-and-Pant-ys-Gawn. They swam together in the lakes, and as they grew up, she admired his growing form, the way his shoulders were literally broadening before her eyes and his height was increasing upwards, the sharply-amused-yet-kind glint in his blue eyes as she traced her finger over the heart-shaped birthmark just under his clavicle. She gripped and stroked the Stilton’s soft-yet-firm white flesh and rubbed her thumbs over its pale blue veins. She stroked and squeezed and gasped as—oh!—the milky white liquid spurted all over her apron.

She slapped the Stilton onto the wooden tray and changed her apron, reminding herself that the cheeses were for Lord Roquefort’s wedding feast tomorrow. Tears poured down her cheeks and over the Danish Blue.

Two years before, when she was butter tender seventeen-year-old, Lord Roquefort left suddenly for Europe. When he returned, he was a cruelly changed man, horribly facially disfigured and embittered, with Gruyere hair around his temples. He showed no interest in rekindling his interest in Millicent and instead had pursued Em Ental, heiress to a great Swiss cheese fortune.

‘I do,’ pronounced Em Ental the next day at the altar, gazing at her groom’s horribly disfigured face after the Stinking Bishop had enquired whether or not she did.

Millicent’s heart dropped to her boots and shattered into a million tiny pieces. It was a Feta worse than death.

‘And do you, Lord Roquefort—’ began the Bishop.

‘Stop! Stop!’ a voice roared from the back of the crowd like a lion demanding to have his words heard.

‘Edam it, I know that voice!’ Millicent quivered gratingly. ‘No Whey! It can’t Brie!’

‘I am Lord Roquefort!’ shouted the tall-and-impossibly-handsome-broad-shouldered-dark-haired man, whom we shall henceforth refer to as the real Lord Roquefort, loudly. His sharply-amused-but-kind blue eyes twinkled outrageously with righteous rage. ‘This man is an imposter!’

Unbuttoning his shirt roughly, the real Lord Roquefort literally planted his feet between the bride and groom, revealing a chiselled muscular shoulder and a sneaky glimpse of dark curling hairs at the top of his manly chest. Just underneath his clavicle was …

‘It’s true!’ cried Millicent despairingly. ‘I’d know this birthmark anywhere!’ She blushed the colour of Red Leicester as all eyes turned to her.

Millicent replied Caerphilly. ‘I, I saw it when he was swimming, your Ladyship. It’s him—I’d swear it on my life!’ she begged imploringly.

‘Yes dear,’ spoke the older woman dismissively, ‘we all recognise him. It’s only been two years.’

‘This deformed man,’ announced the real Lord Roquefort tirelessly, ‘is the penniless Baron Von Fuchtsahne! And he’s attempting to steal my position and my rightful bride to whom I’ve been betrothed since I was a child, the heiress to the Ental cheese fortune!’

Some burly men helpfully appeared and bundled the pauper Baron imposter away.

Em Ental gazed happily upon the much-improved visage of her husband-to-be, the real Lord Roquefort, as he took his place possessively by her side.

Millicent’s shattered heart, which had just moments ago put itself back together flawlessly and had been once more throbbing wildly in her chest, dropped to her boots once more and smashed itself to smithereens.

‘On my travels,’ the real Lord Roquefort announced to the bated-breath of the crowd, ‘I discovered some irregularities in the inheritance of the Ental cheese fortune, involving some monks, the Nazis, and a century-old worldwide dairy conspiracy. I was shocked to discover that in fact Em Ental is not the rightful heir to the Ental cheese fortune at all! In fact, the rightful heiress is Wen Sleydale, who is known to us as … Millicent! Our dairymaid, who was given to us in secret to be raised as an orphan for her own protection from the Swiss cheese mafia.’

Wen-formerly-known-as-Millicent dropped her tray of cheeses with a loud crash into the silence. The real Lord Roquefort gazed at her longingly. ‘My love, I was always crackers for you. You have cheese in your blood.’

‘I do,’ she quipped shyly, and all the crowd con-curd.

Amity rarely appears in public, but can be contacted through her close personal associate, Becca Hazleden. Becca is a writer and a recovering academic who really should know better. She also writes under the name Rebecca Hay.