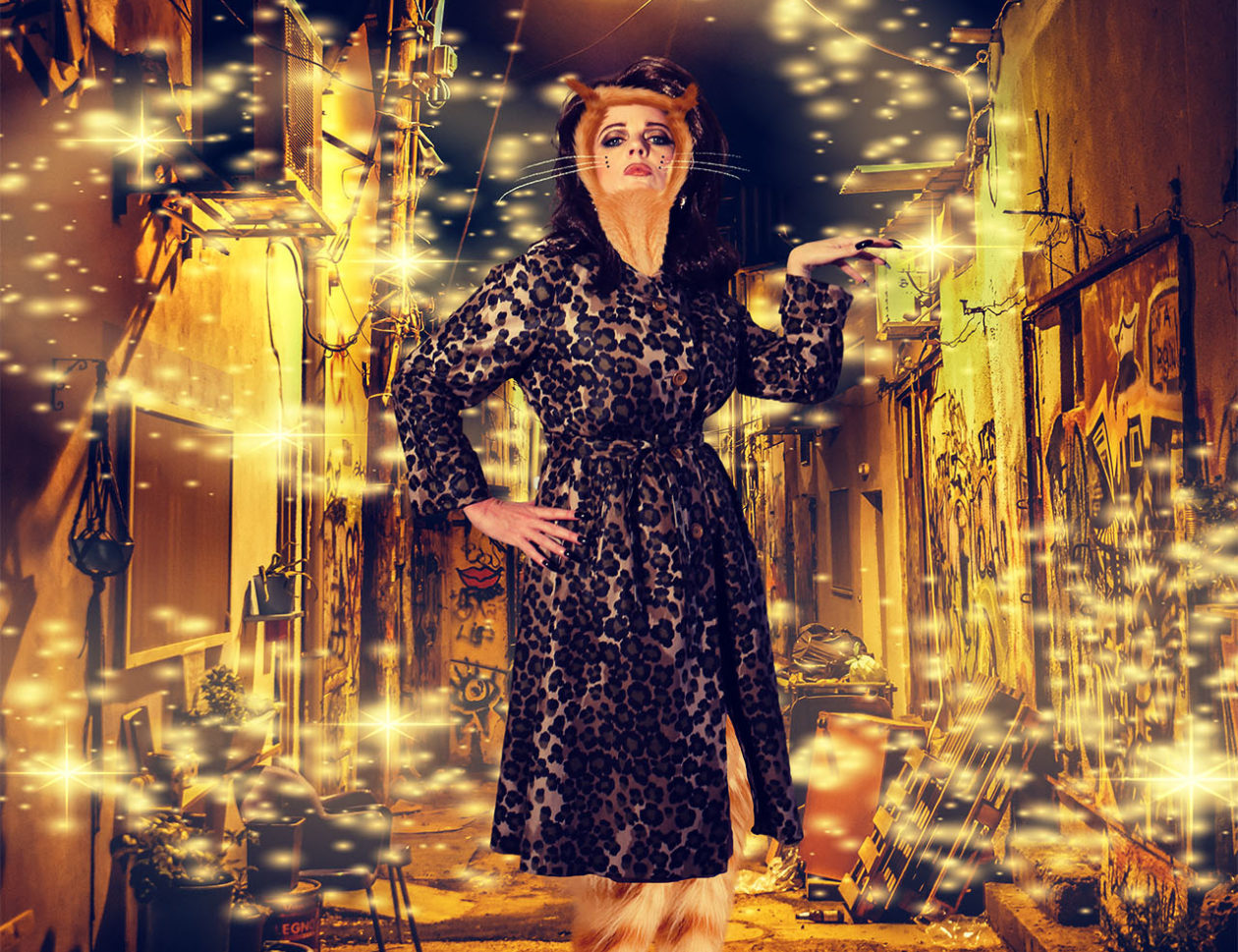 Queenie rolled, yowled, rubbed her body against a tree, then licked her six nipples. It had been thirty minutes since her last tom and she was feline good. She was in her oestrus cycle and ready to scratch another itch. She furbished her vulva with a Cheshire grin. Her last mate had fur-midably delivered on the pungent promise of his territorial urine spraying; she’d barely had time to register his flehmen response to her own pheromonal billboard before he’d grabbed sex by the tail. He’d been a real animal about it, too—not like those in-fur-ior Instagram cat-stratos.

It was a hairy situation: humanity’s incessant anthropomorphising of the feline kind had cat-astrophically cur-tail-led the species’ behaviours, threatening to render them sexually cat-atonic and turn them into hiss-tory. ‘Cat cartoons, memes and musicals?!’ spat Queenie’s reluctantly humanised inner monologue (she, too, had been cat-alysed by human arch-cat-ects), ‘You gotta be kitten me!’

She paw-sed in dismay at her veritable cat-alogue of involuntary puns. ‘Wait a meow-ment! There didn’t used to be a whisker of wordplay in my internal thoughts. Now even my means of expression has been mauled! And all be-claws humans have been lion about our true selves—as if domestic-cat-ing us wasn’t enough. This is a-paw-ling—puns freak meowt!’

She brought up a hairball and inspected the vomitus. It was mostly fur but had a small amount of food in it—an irregular event that was nothing to worry about. Completely natural. Not that you’d know it from the un-fur-tunately cutsie human portrayal of cats. Even so-called sexy human renderings of cats came with hiss-terical genital pixilation and a third of the regular breasts. ‘Well scratch that!’ she raged in mental re-tail-iation, ‘I seek cat-agorical, sex-paw-sitive truth in the barbed end of a tom’s penis while he pins my neck with his teeth and mounts me from behind!’

Queenie’s ears pricked at an answering caterwaul. And there he was—paw-sibly the most fur-bulous beast she’d sighted in her ten months on this earth. His thick neck, skin, and muscles joined with fleshy cheek jowls to give him a purr-fect fighting physique. His shiny coat suggested good health and reduced risk of parasites. She wanted him so furry much right meow!

Queenie signalled her willingness to mate by assuming the lordosis position. She bent her forelegs and raised her rear to the sky, then flicked her tail expli-cat-ively to the side and beckoned him with her vulva. As the tom approached, she treaded her rear legs while remaining tan-tail-isingly in place. Her last mate had mounted her in sixteen seconds, but this one showed more restraint as he sniffed around her rear end. What a pussy.

She lowered her chest further to the ground in preparation for the singular pain of a tom’s thorny, serrated penis as it stimulated the lining of her vaginal vault, followed by the inevitable laceration of her vagina by its backward-pointing spines upon withdrawal. Me-owch! ‘Hang in there, baby’ she told herself—unwittingly morphing into a kit-sch motivational poster copycat. She wondered how effective the dozens of hook-like structures on a tom’s penis could really be at scraping rival semen from the womb. The genetic variation of her previous litter had certainly demonstrated the limitations of this technique. He should fur-get about it.

She yowled her impatience and clawed urgently forward while dragging her elevated hindquarters behind her. When would he put her out of her mew-sery? But when contact finally came, it wasn’t with a two-inch shaft boasting a hundred keratinised penile spines to aid its grip; her vulva was unceremoniously bunted with a large, smooth, rounded speech bubble bearing the phrase ‘I can haz cheezburger?’

In a state of cat-aplexy she realised the humans had gotten to this tom, too. And to her. Fur now she could read—but only her curiosity would be sated.