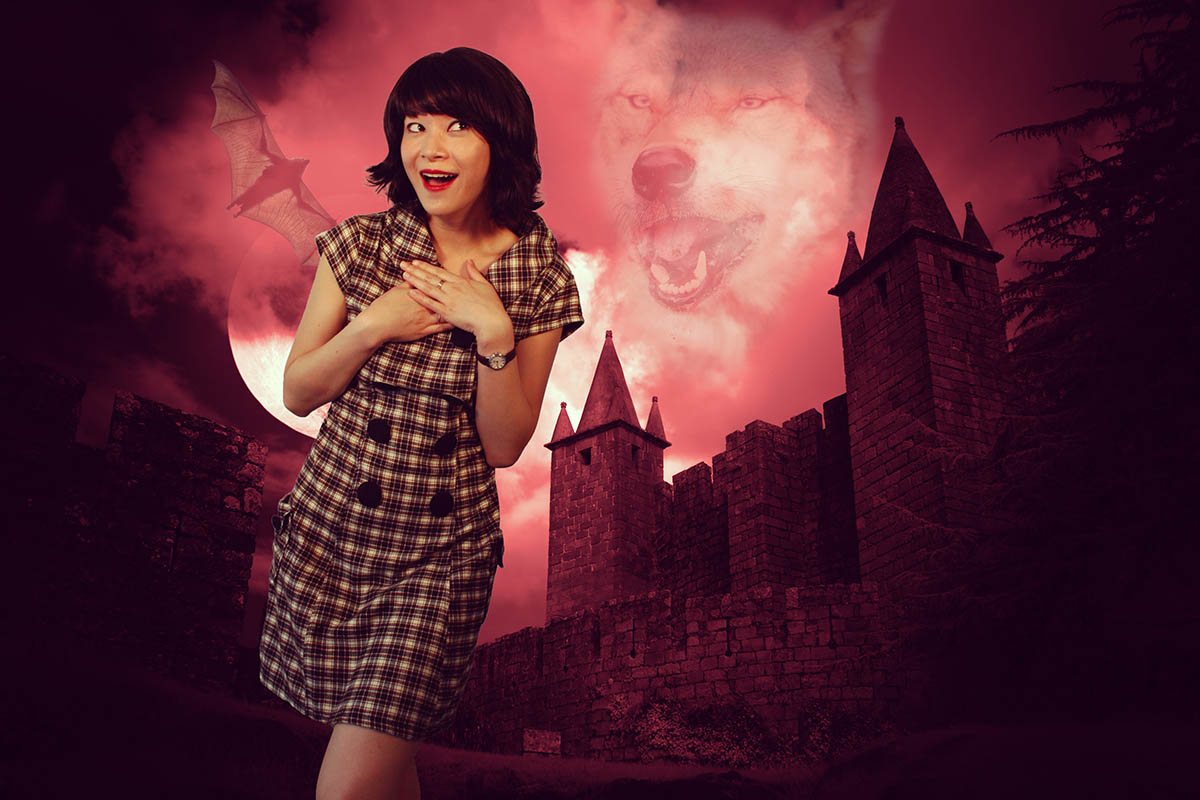 I followed Edward up a narrow flight of stairs to the top level of his family home. The house was eerily quiet and set deep in the mountains, far out of reach from the police or any emergency crews I could have contacted if I somehow realised how dangerous it was for me to be in the woods with a stranger I was certain thrived on human blood. ‘I’m in Edward Cullen’s house and he’s the most attractive boy at school,’ I repeated to myself as I climbed higher and higher up the stairs, unwilling to believe my luck.

Edward lived alone in the attic. His room was furnished sparsely: a ceiling high shelf stood beside his bed—a dusty, coffin-shaped mattress—and heavy, damask curtains sank to the floorboards, shutting out any glimpse of sunlight. It was nearing twilight now, but the curtains were drawn shut, and I wondered aloud about this to Edward.

‘What’s with the curtains?’ I said, running my hands across the rich fabric. ‘It’s almost night, so there’s no glare coming through.’

‘I like my privacy,’ Edward said, shooting me a half grin, the looks of which sent spasms of warmth up my thighs and straight into my hoo-haa.

I sat down on Edward’s bed and fanned myself. Edward was rifling through his record collection, but stopped momentarily, as if sensing my rapid pulse. After a few solid minutes of this—Edward staring at me while caressing a record sleeve, running his palm over and inside the case repeatedly like he was stuffing a Christmas turkey, and me fanning myself—Edward laid the record he was holding flat on my lap. I smiled and ran my hand across the sleeve.

‘Wow,’ I said. ‘A limited edition copy of Muse’s ‘Black Holes and Revelations’. They are the best band. I think they should be on every motion picture soundtrack and then Radiohead’s 15 Step should play inexplicably during the film credits.’

Edward nodded in agreement and then flashed his pearly whites in a sly smile. I quivered and I felt some warmth gush out of me. I realised with some surprise that I had just perioded in Edward Cullen’s house, but I pretended to ignore my feminine mistake.

‘Secretly,’ I said, wincing as a droplet of blood trickled down my thigh. ‘I think people at school tease me about my passion for Muse because I am so ordinary and ugly. Only eight boys have asked me out since I moved to Fork.’

‘Make that nine,’ said Edward, resting his hand on my thigh and licking his lips. The blood on my legs had crusted over and a clot that had fallen out of me lay steaming on Edward’s floorboards, but this only seemed to delight him. Suddenly though, Edward retracted his hand from my thigh as if he’d been shocked by some invisible force. He staggered backwards and flattened himself against the opposite wall.

‘Bella!’ he exclaimed desperately. ‘I’m afraid I’ll hurt you! You deserve to know the truth.’

‘The truth?’ I asked, puzzled.

‘Yes,’ Edward said, breathlessly, as he dragged me out of his room and back down the stairs. In the living area, he sat me on a stool before his mahogany grand piano and began playing a morose-sounding ditty. About halfway through the sonata, I started sort of zoning out and thinking about summer jobs I could apply for. But soon, the beauty and the sadness and the beautiful sadness of the melody captivated me. I hate weeping in public because it makes me look as if I’m capable of harbouring any semblance of human emotion, but I allowed a single tear to fall from my lashes.

‘That was wonderful,’ I gasped.

Edward took my hands in his and grasped them with his icy fingers. I imagined what it would feel like for them to be burrowing inside me and was reminded of an afternoon I spent at home experimenting with arctic pipelines. I’d eaten nothing but starch for weeks and at last my stools had achieved the right consistency. I wondered if Edward’s manhood would feel the same.

‘Bella,’ Edward said, suddenly kneeling before me. ‘Would you do me the honour?’

Edward reached into his trouser pocket and produced a small, velvet box. Inside it was the largest diamond ring I had ever seen.

‘You didn’t,’ I gasped. Outside the moon was beginning to rise, and the diamond sparkled in the last rays of sunlight.

‘No,’ Edward said, ‘I didn’t. I’ve picked one of my scabs off and welded it to some cast iron I found in the woods. Don’t wear the ring indoors or at night if you want to impress your friends.’

‘I don’t have any friends!’ I exclaimed, leaping into Edward’s arms. ‘You’re my only friend, Edward.’

‘Good, Bella,’ Edward said. ‘A woman shouldn’t have friends. She should only have two men who are preferably ancient monsters competing for her love to give her that sense of community and self-satisfaction that she so sorely needs.’

‘Well,’ shouted Edward from the kitchen. In one hand he was holding his mobile phone on dial to the marriage registry, and with the other, he was binding his member with bubble wrap to protect my vaginal canal from the beating it was soon to receive. ‘Well,’ repeated Edward. ‘What do you say? Will you marry me?’

I stepped over to the shag rug in the living room and laid down on it, my limbs splayed.

‘I won’t marry you until you take me right here and now.’

I tore my pants off, which sent waves of blood crashing onto the floorboards. The shag carpet was ruined. Edward turned away from me upon seeing the blood pooling by his feet. Then, suddenly, he reached into the pantry and produced a pair of gardening shears. He hung up on the registry and clamped his penis inside the shears.

‘Don’t tempt me, Bella,’ Edward said, tightening his grip on the clippers. ‘Don’t tempt me or I swear I’ll cut it right off. I’ve loved you since the moment you were conceived, since the moment you were splashing around in your mother’s delicious gut plasma, and I won’t risk a lifetime of waiting for this. We can’t be together until we’re married. Also, there is the real possibility I could fuck you to death.’

‘Please,’ I begged, as another tear escaped me. ‘I need you to.’

At that moment, Jacob Black burst through the doors in wolf form, sending shards of glass exploding into the kitchen. His teeth were bared and dripped globs of saliva so large I could see my own terror reflected in them.

‘I’ve heard with my superhuman wolf ears that you’re desperate for sex, Bella,’ said Jacob, resuming human form. He was naked, and I could judge from the pockets of forest mulch pinned beneath his foreskin that he had been running at lightning speed.

I turned away from Jacob and he gripped my shoulder forcefully. I cringed under the pressure but stood my ground. Blood continued pouring out of me, which seemed to concern Jacob and confuse Edward, who kept shuffling backwards and forwards, still clutching the gardening shears, uncertain of whether to protect me or castrate himself on the spot. Jacob let out a deafening, wolf-like roar.

‘If I can’t fuck you, I’ll fuck your baby!’ he yelled, as he laid a hand on my stomach and imprinted my uterus. Certain now that this deal was non-negotiable, Edward and I agreed that Jacob could fuck our future baby and all was well.

Thisbe Blaze, heiress to the Blaze Family Blazers fortune, forfeited her riches to younger brother and head seamster Hermes Blaze last spring to experience life as a commoner. Since completing online courses in puppetry and interpretative jazz, she has found great success with her hyperrealistic floral arrangements depicting famous literary hounds, which are displayed in rural libraries throughout Bristol. Despite having been proposed to over 58 times, she lives alone with her 12 male servants and Bibiana, her beloved tabby, on a tasteful yet massive country estate.