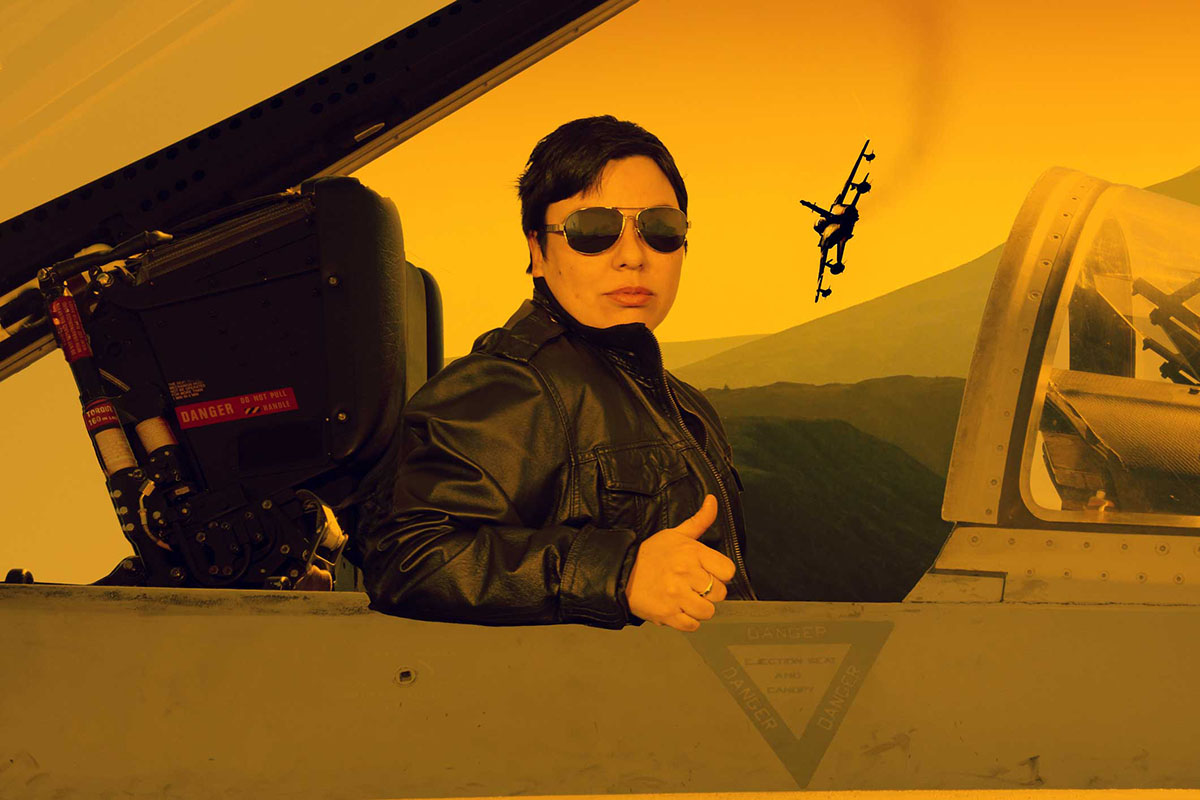 As she smashed the volleyball over the net, Maverick thought again about Charlie. Perfect, golden-haired Charlie, with her big teeth, her bigger shoulder pads, and her PhD in astrophysics. God. What a woman.  Maverick had fallen hard the first night she’d seen her in the bar near the Top Gun academy. She’d serenaded Charlie with a deliberately tuneless rendition of ‘You’ve Lost that Loving Feeling’. She’d even followed Charlie into the bathroom after Charlie had made clear her lack of interest. Some people say that nothing succeeds like success, but Maverick knew some things about ladies and success, and that nothing succeeds like relentless cockiness and low-level stalking.

The day after the encounter at the bar, Maverick found out that Charlie was her instructor at the Top Gun academy. Whoops. Awkward. Even now, as she leapt from the burning sand to return the volleyball once more, Maverick could feel the surprise of that moment, seeing Charlie standing at the front of her classroom. She could also feel a trickle of sweat, or something more viscous, drip into the crotch seam of her Levi’s.

Until that night, Maverick had had two goals in life. One was to be the best fighter pilot in the Top Gun academy. The other was to be Jodie Foster. If both dreams came true, she knew she’d be unstoppable. Now, she suspected that her life needed a third thing: a woman. That woman. Charlie.

She pulled her keys from her pocket.

‘I have to go,’ she told her friends.

‘Aw, come on,’ said Maverick’s wing-lady, Goose. ‘Let’s keep playing.’ But Maverick was firm. Her flat abs and bulging biceps were firm. Her cute little butt was firm, and her stocky little legs were firm. But most of all, her resolve was firm. It was nearly 5:30 in the afternoon and Charlie had asked Maverick to dinner.

Maverick straddled her Kawasaki GPZ 900R and headed for the address Charlie had written down. As she sped through the Californian sunset, she wondered why Charlie had made the date for 5:30. It didn’t seem romantic, somehow. Maverick loved to be fast, but she hated to be premature.

As she arrived at the address, Maverick surveyed the low brick building with a grin. It wasn’t Charlie’s house after all. As it turned out, Charlie had invited her to the earlybird special at the local buffet restaurant. Maverick felt a warm buzz radiating from her nether regions. She loved a full stomach and a bargain meal. Could Charlie be any more perfect?

Inside, she saw that Charlie had nabbed a table for two right by the dessert bar.

‘Charlie, you look beautiful,’ Maverick said. She did, too. Her golden hair fell in loose waves around her face and gently caressed her high cheekbones.

‘Thanks, Maverick,’ she said, smiling alluringly. ‘Sorry, I’ve already started on my cheesy toast. I hope you don’t mind.’

They small-talked through their first three plate-loads: home towns over pumpkin soup, childhoods over potato skins, television shows over spaghetti bolognaise. Then, as Maverick began her first dessert, the conversation turned serious.

‘Charlie, I want you to know that I have two ambitions in life. I want to be the best pilot in the Top Gun academy. It’s what I’ve worked for all my life, it’s in my blood, and I know I can do it. But my other aim is harder, and weirder. I also want to be … I want to be Jodie Foster.’

Charlie dropped her spoon of soft serve back into her bowl with a clatter.

‘Really,’ Maverick said, her heart pounding in her chest.

Charlie wrapped her hand around Maverick’s forearm. ‘If that’s what you want, I want those things for you, too, Maverick.’

‘Thank god. I was worried. You’re hard to read, Charlie. Sometimes … ‘Maverick grappled for the right words. ‘Sometimes you slip beyond my hard deck, and I don’t know how I can engage you.’

Charlie cast her eyes down to her bowl and watched her Smarties bleed their red and blue coating into the melted soft serve.

Charlie ran an elegant hand through her tawny locks. ‘I—it’s hard for me to say.’

Maverick reached across the table and grabbed Charlie’s non-spoon hand.  ‘You can trust me, Charlie.’

At last, Charlie’s green eyes met Maverick’s blue ones with a fierce intensity. ‘I’m scared, Maverick. I’ve been an over-achiever all my life. I’ve played by the rules. All of my study, all of my training is about learning the limits of moving bodies. Now I want to go beyond those limits, regardless of the consequences.’

‘What are you saying, Charlie?’

Charlie reached under the table and pressed her hand against the crotch of Maverick’s Levi’s 501s. ‘I’m saying,’  she whispered, ‘you’re like no one I’ve ever met before—and I want to ride your highway to the danger zone.’

‘Charlie,’ she whispered into her ear. ‘I want to see you without your shoulderpads. I want to buzz your tower.’

The Kawasaki sped ever faster through the California night as Maverick pulled the throttle harder and harder. Charlie’s endless legs were spread behind her, and she could hear Charlie panting rapidly. Maverick panted too. She wanted to do this forever. She felt incredible, like a god. She felt an inexplicable need for speed. As she pushed the bike faster and harder, Charlie started murmuring words and phrases, words and phrases that didn’t seem to make any sense. Some of them were snatched away by the wind, but some of them came straight into Maverick’s ear.

‘Lambs!’ she cried, ‘and they were screaming!’

A peculiar feeling overtook Maverick. A feeling of heat and infinity, a feeling of expansion. Whatever Charlie was doing, it was weird, and it made Maverick feel like she’d never felt before.

‘Charlie! Oh my god!” Maverick moaned. Was this an orgasm? Something else? Her vision began to blur.

The world seemed to buckle as it grew brighter and closer.

Maverick pulled the bike over, panting. She turned back to Charlie.

‘I’m fine, Maverick. Better than fine. That was amazing. It’s you, Maverick. You’re—’

She looked at Maverick with a gaze of shock and wonder.

Maverick leaned into her mirror, and was astonished by what she saw. Could it be true?

She blinked. Jodie Foster blinked her clear blue eyes back at her. She touched her newly angular nose. It was Jodie Foster’s nose. She grinned Jodie Foster’s small white teeth. She’d done it!

She put her newly slender fingers into Charlie’s tousled blonde hair and kissed her in jubilation.

‘God, Maverick. Your ego wrote a cheque that your body just cashed.’

Räd Hallø loves ‘Cagney and Lacey’, her three cats, saunas, and the earlier films of Jodie Foster (excluding <‘Mesmerized’). Aside from being a gifted writer, she is also a talented musician who fronts the Heart tribute band Dessert Hearts.

Räd is seeking representation for her scorching, tender, and surprisingly upbeat novel about womyn love, ‘The Swell of Moanliness’. Interested agents and publishers can contact Räd via her manager, Michelle Dicinöski.