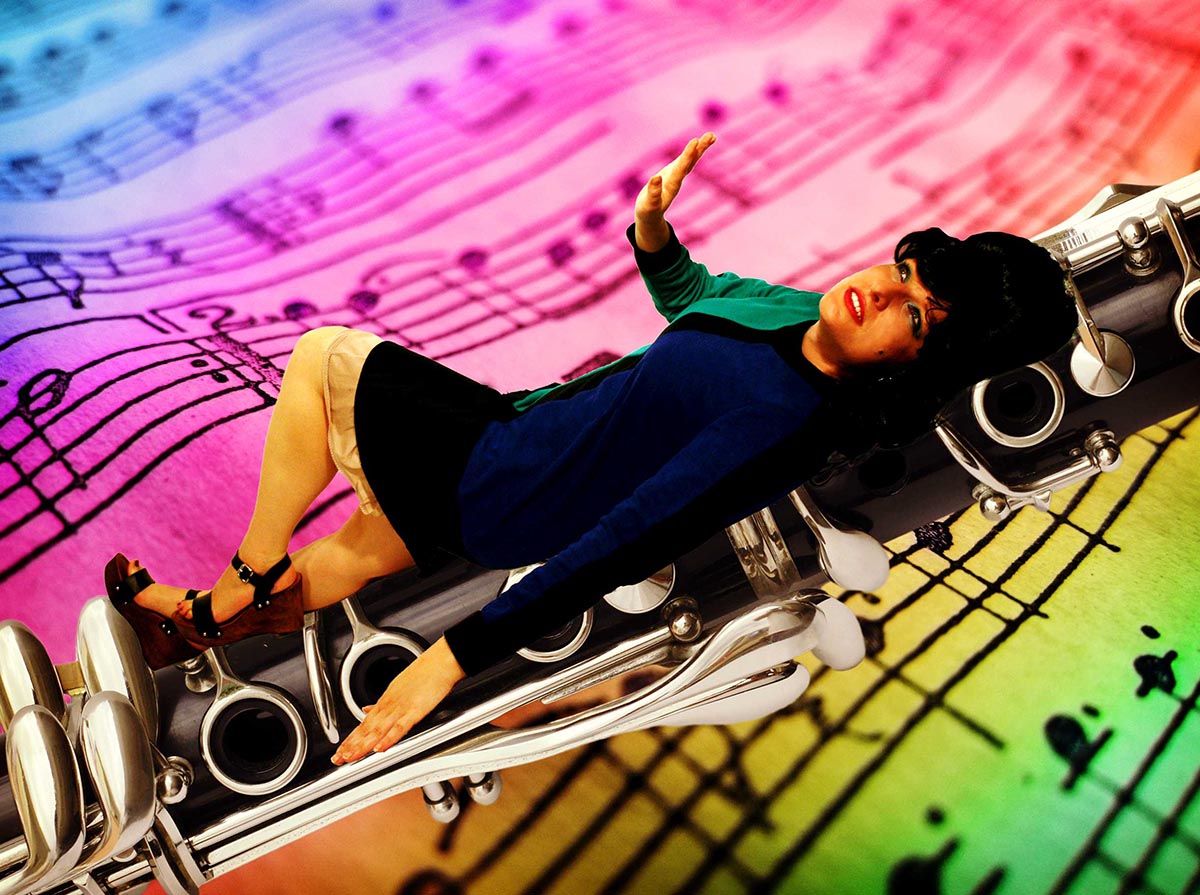 Martha stood outside in the broad daylight of the afternoon. She was due for her weekly clarinet lesson in less than an hour and gave a pianissimo sigh. Repetitive scales were the last thing on her mind, and anyway, she hadn’t practised as much as Maestro Hermstedt demanded. She never practised enough.

Suddenly, Rufus and Charlie, the boys from down the road, came up the road on their skateboards, making a rather fortissimo racket. Martha tried to spin sideways, but it was no use. Rufus, now out of control on the pavement, rolled right into her.

‘Jeez, Miss Martha!’ cried the teen, ‘sorry about that!’

‘Boys, why the rush?’ gasped Martha to both of the boys.

‘GINO PANETTI AND THE YETTIS!!!’ exclaimed Rufus and Charlie excitedly.

Rufus explained, ‘Gino Panetti is only the coolest electric guitar player in town! He’s in town playing a concert tonight and he asked Charlie and me to hand out flyers.’

‘Here, take one,’ grinned Charlie and pushed a piece of paper in Martha’s hand. She looked at it and saw it was a flyer for the show they were talking about.

‘Why don’t you cancel your clarinet lesson, Miss Martha, and do something different for a change? You just might dig it,’ smiled Rufus, as he and Charlie sped away down the road.

‘How did he know about my clarinet lesson?’ wondered Martha, watching as they sped away.

Martha looked at her reflection in the mirror, holding up one dress and then another. She was really fit but indecisive and didn’t have a clue about what to wear.

‘I guess I’ll just go with this one,’ she thought, and put the really sexy black dress on. And let her hair down for a change.

The club was down a set of concrete stairs and immediately Martha felt in another world, full of smoke and darkness. She was certainly out of her element.

‘Why didn’t I just go to Maestro Hermstedt’s?’ she thought, and walked towards the stage. There was smoke everywhere and it was really dim.

‘Hey, lady, have a drink!’ said the bartender, winking.

‘Ok, although I normally don’t. I’ll have a red wine, thanks.’ She paid for it and found an empty table. A jazz band was playing and she overheard someone say that Gino Panetti would be on afterwards.

As she listened, she started to feel tingly, feeling things she had never felt, because of the jazz music.

‘Thank you very much, everyone, we’ve had a blast. Next up is Gino Panetti, the coolest player in town!’

Martha did a double take. The musician speaking into the microphone was Maestro Hermstedt! He swaggered down from the stage and joined Martha at her table.

‘Hey, Martha, what a surprise to see you here. You missed your lesson, so I thought you must be ill,’ he winked.

‘Maestro Hermstedt! I can’t believe … I never would have imagined! You sounded fantastic!’

‘And I’m sorry I missed your lesson. Rufus and Charlie from down the road suggested I see Gino Panetti and—I don’t know why, but I decided to …’

‘Enough, Martha! Rufus is my nephew and whenever I talk about you, I say that you should do something different for a change.’ He patted her hand in a musical rhythm. ‘I’m glad you’re here and you can understand that music can be wild.’

‘Do something different for a change,’ Martha pondered, ‘that sounds familiar.’

The room dimmed and the band began. Gino Panetti was everything from the flyer and more. He was chiselled like a marble sculpture and had piercing eyes that every woman wanted to be penetrated with like a spear.

Gino and the Yettis played just like it would have been when Jimi Hendrix invented the electric guitar at Woodstock. Each strum sounded nothing like an acoustic guitar; rather, it was like a robot or a car blasting from the wild-looking instrument. Electric.

Again, Martha felt that tingly feeling again, because the music was arousing her. She had never felt like this before.

The night swept by in an instant. Gino played hit after hit—‘Kissing a Cloud’, ‘Praying for an Angel’, and ‘Hold onto the Feeling’. Before she knew it, Gino was announcing the last song of the concert.

‘Thanks so much for coming, you’re all amazing. This is our last song. It’s called ‘Let Go for Tonight’ and I would like to dedicate it to the gorgeous lady in the sexy black dress with long hair. I hope I get to meet you afterwards,’ he winked.

Martha’s heart skipped a beat. Gino was talking about her! His piercing eyes were penetrating her! She could barely listen to the song, she was so tingly.

Afterwards, Gino swaggered down from the stage and joined Martha and Maestro Hermstedt at their table.

‘And who is your gorgeous friend, Maestro?’

Martha bowed her head shyly and said faintly, ‘I’m Martha and I thought your show was the coolest in town.’

‘Martha is a real talented lady, Gino, one of my favourite students.’

Gino winked and held out his chiselled hand, ‘I’ll bet you are, Martha. What say we take a walk?’

Martha took a deep breath and reminded herself, ‘Do something different for a change.’

Backstage in his dressing room, Gino told the Yettis to give them some privacy.

He strummed her face and Martha was tingly again. She felt like she could do anything and tongue-kissed him with abandon. This made Gino hard and he pressed his chiselled body against hers.

‘I want to play you another song,’ panted Gino, ‘with my love instrument. I can play it adagio or allegrissimo—whatever you like.’ Martha tried to remember everything she could about playing the clarinet. And they did it all night long.

Small-town Bribie Island-born writer Chenille Voss is fond of a good story. A fan of reading as a child, she fell in love with the stage when she attended an online acting course. With aspirations of becoming a novelist or columnist of some sort, the spunky Voss took a chance and moved to Brisbane. After taking jobs in retail and direct marketing to hone her writing skills, Voss currently works in accounts receivable at a law firm, and continues to write for pleasure and sometimes therapy. It is Voss’ goal to be fierce, terrible, perilous, and beautiful with a pen.