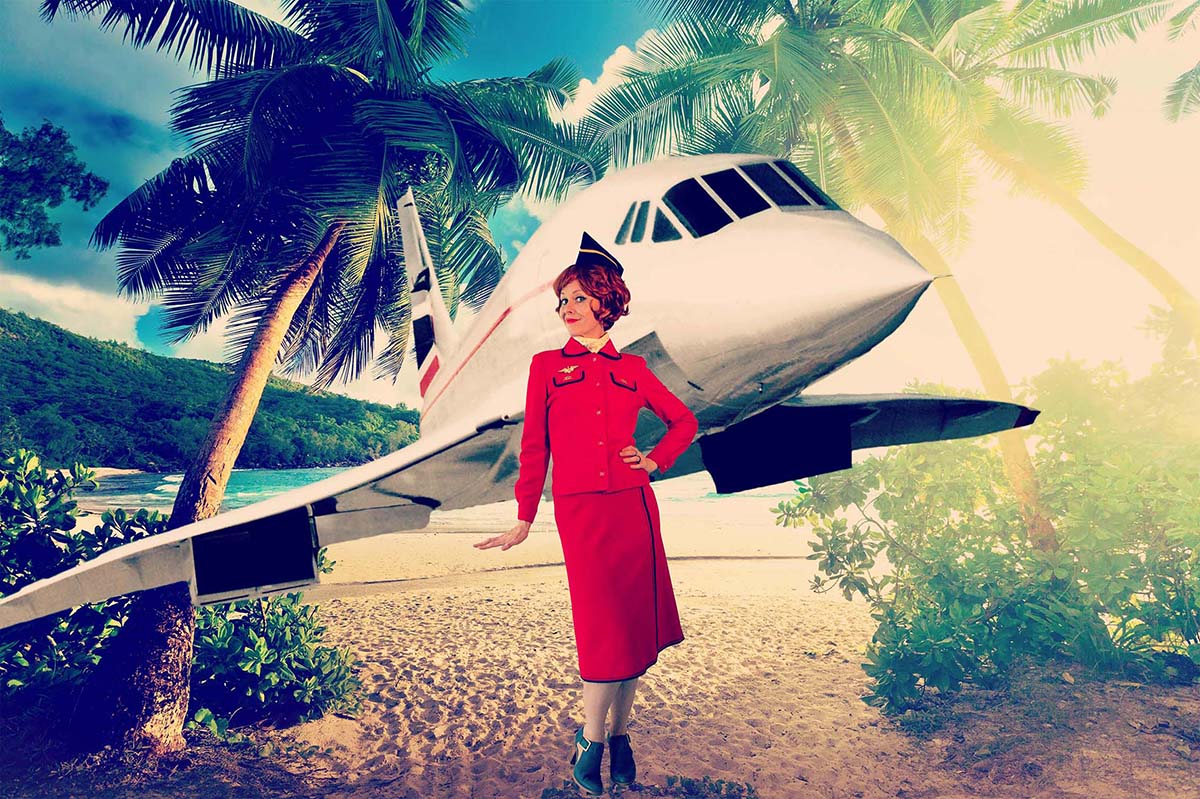 Miss Davinia Cumulo-Nimlust slowly wrapped her ruby red lips around the stiff, straight shaft. It was smaller than she remembered, but no matter—she had a job to do, and she’d been trained to do it well. She made sure that all eyes were on her before sucking in a lofty lungful of air and blowing hard and fast until the shaft released in a rush of relief. Success!

‘Ladies and gentleman, that concludes this morning’s safety demonstration,’ Davinia breathed briskly as she removed the whistle from between her luscious lips and slipped the airline safety jacket over her head in one enviously effortless execution that failed to disturb a single hair on her carefully coiffed crown. ‘Thank you for flying with Adonis Airways. Have a safe trip!’

This was ironic—indubitably so. For while the passengers could sit back and enjoy the ride, there would be no in-flight entertainment for Davinia—and that wasn’t just because she was an air hostess. No—it was because this prodigiously packed plane was piloted by none other than Captain Dirk Gearstick, the man behind the winsome wheel of Davinia’s hurting heart and the one who bore the burdensome badge of being her long-lost-but-never-forgotten ex-lover.

Davinia felt as if the floor was shaking beneath her feet. It was—the plane was taking off. And so was Davinia’s resolve: No, she wouldn’t allow Dirk to race recklessly along the runway of her desires with his devilishly debonair looks and magnetically mellifluous voice! Their foolish flight of fancy was finished—Dirk’s commitment had been delayed one time too many, and Davinia had to catch her airline connection and move on before she got stuck in a heartbreak holding pattern.

As if on cue, the aircraft’s sophisticated speaker system was delivering Dirk’s dulcet tones directly through the cabin. ‘Ladies and gentleman,’ he vociferated with his trademark velvety vocals, ‘This is your Captain speaking. If I could have your attention a moment, please …’

Oh, those undulating utterances! That come-hither command! Davinia couldn’t help herself; hearing Dirk made her enviably flat stomach drop drastically downwards like the wheels of a plane coming in to land. It was as though he was paging her palpitating heart! Wait—he was!

‘Ms Cumulo-Nimlust, please report to the front of the aircraft immediately. Your Captain requires you to enter his cockpit.’

‘Damn you, Dirk!’ declared Davinia. She simply couldn’t endure any more of this tiresomely traumatic turbulence—it was time to apply the brakes to her feelings before they ascended to an awkward altitude and set her up to endure another exhausting emotional crash landing.

Davinia swept spectacularly into the cockpit, her eyes flashing like a set of aircraft aisle emergency lights, only without such alarming implications. ‘Dirk,’ she intoned intensely, ‘it’s over. You hit cruise control on our love and it lost all sense of direction. You’ve got your head in the clouds if you think you stand a second chance with me! Also, I have to go and help Ophelia with the drinks service.’

‘Davinia,’ drawled Dirk, ‘I won’t take no for an answer. You’ve climbed aboard my heart and you won’t disembark no matter how hard I try to assume the emotional brace position and throw down the inflatable slide of sexual distraction. I’ve been on autopilot ever since we split. Davinia, you give me wings; and I’ve never seen anyone handle a drinks trolley so deftly. Let’s take off together. Will you be my co-pilot … in love?’

Davinia was done for. She could feel her gears gradually shifting and her deepest desires finally reaching their destination. Could it be? Would she welsh on her word to weather Dirk’s charms without wilting in the presence of their passionate power? Would true love make her senselessly stow the tray table of her troubles and allow Dirk to enter her airspace?

Yes, oh, YES! ‘Oh, Dirk!’ Davinia declaimed. ‘You might be a bounder and a cad, but you’ve always been the captain of my amorous affections. You’ve sent my love sky high and I’m ready—I want to join the mile high club of forever with you!’

‘Roger that!’ Dirk disclosed dishily as he dextrously applied his probing pilot hands to the aircraft’s complex control panel and firmly grasped the large knob marked CRUISE CONTROL. ‘Now fasten your seatbelt, my darling Davinia—we’re going to be experiencing some turbulence in the cockpit and I’ll need both your hands on my deck.’

‘I’m coming, Captain!’ Davinia dispatched. It was time for touchdown—and at last, Dirk and Davinia were ready to go full throttle together.

Tuesday Thatch BA MA Grad Dip Cert IV Small Business (pending) wants you to be quiet in the stacks; she has ways of making you not talk. A former academic librarian with a penchant for pince-nez and a plethora of as-yet-unpublished publications to her name, Ms Thatch enjoys tweed skirts, twinsets, and the tactile pleasures of thumbing vigorously through a volume of purposefully chosen prose.

She derives intense satisfaction from assisting helpless male academics find exactly what they need from between her well-stacked shelves. Her hobbies include touch typing, watercolour painting, and exploring the rich intricacies of the Dewey Decimal Classification System.

She is also the tweed clad alter-ego of Carody Culver, who resides in digital form at www.carodyculver.com.