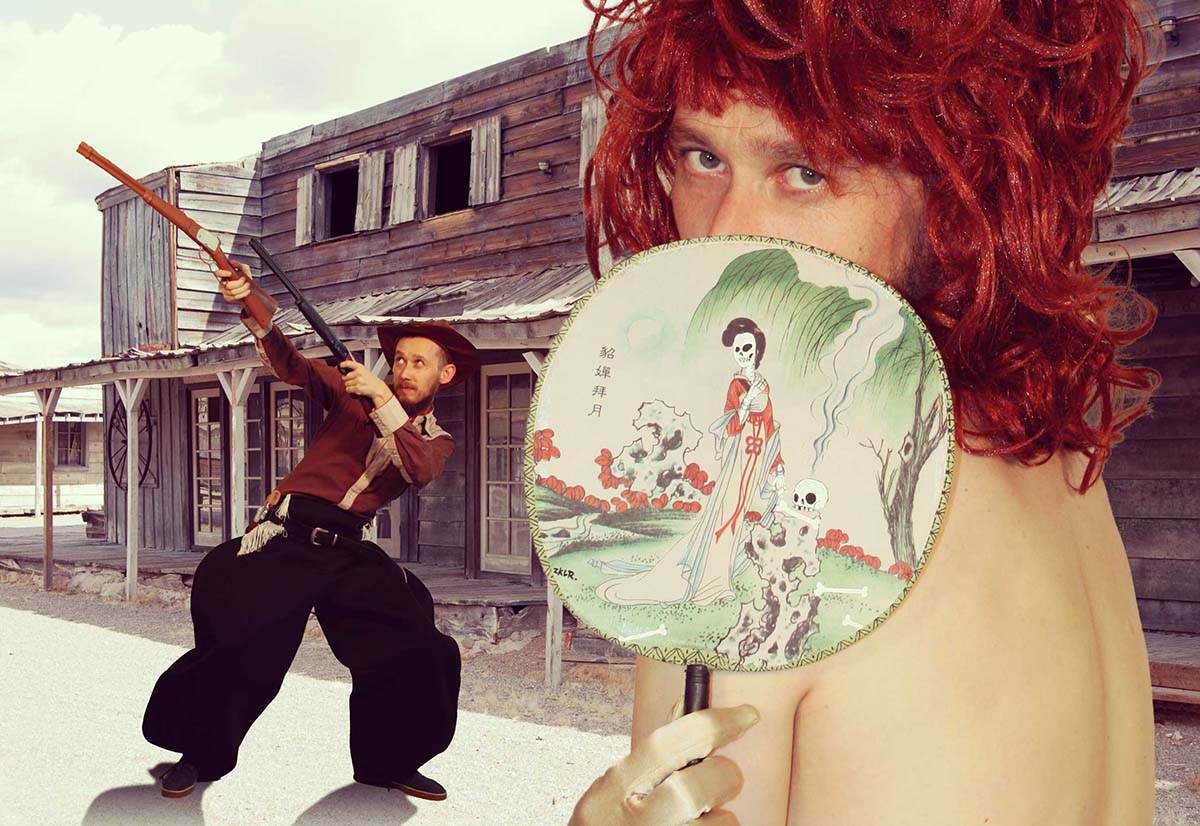 Peg Town was a Wild West outpost out beyond the Ozark Goose Trail. It was so named for the wooden leg factory that provided the town’s main income. The rest of their income was provided by robbin’, murderin’, shovin’, pig-thievin’, horse-flippin’, talkin’ in church, and general grizzly meanness.

Yes sir, them folks of Peg Town were meaner than a prickle mule full o’ wasps, so there was some hubbub when a covered wagon rolled into the main street one day and from it alighted the primmest foot the townsfolk ever done seen.

Now connected to that prim little foot was a prim little ankle somehow even primmer than the foot, and lace petticoats primmer even than both of the other. Prim Miss Polly Primrose Patience Prim stepped from the wagon, sure enough primmer than a hopscotchin’ dairy bird on every second Sunday.

Now what you need to know is, neither Prim Miss Polly Primrose nor myself has been entirely honest with you. Y’see, beneath that prim visage of prim primosity beat the vengeful heart of a killer.

Her partner in crime has been her husband, Murderin’ Ollie Murderson of the Texapalloosa Murdersons. They terrorised the Wild West, robbin’ and murderin’, and amassed a great pile of loot—but in the midst of it all they done fell out of love. Yes sir, their love had dwindled like a sugar steak dropped in a trough of dog water.

Now a divorce among the criminal classes involves a certain amount of double crossin’—Ollie made off with the loot and Polly Primrose had nothin’ but a half ounce of lead in her chest.

She got herself patched up by a sawbones and set her heart to revenge—revenge, tenacious like a Stetson full of beavers, unforgivin’ like a mountain lion in a bow tie.

Havin’ gotten word Ollie was stayin’ at Goodie Swallows’ Saloon, Polly Primrose attained entrance there with a deception by which she claimed to be a poor widow travellin’ alone. Not a total deception—she’d be a widow soon enough. Before the moon owl made porridge of the night worm, Murderin’ Ollie Murderson would be dead as a boot full of pickled lamb faces.

Polly took her aforementioned prim little foot, cocked her colt .45 and kicked the door to Ollie’s room clean off its hinges, the fire in her eyes burnin’ like a burnin’ fire, the colour of burnt fire.

‘Cod-sarn it, woman!’ said Murderin’ Ollie Murderson, reclinin’ in a sudsy tub. ‘It’s bad enough you don’t have the decency to stay dead when a man shoots you, then you gotta interrupt his bath?’

‘Oh, I aim to interrupt more than that,’ said Polly Primrose, brandishin’ her gun.

‘Now Prim,’ said Ollie, ‘I don’t remember your gun barrel bein’ so long, nor so girthsome.’

‘I been through changes since last we met, Ollie. I admit I came here fixin’ to see you dead, but on the way I met a hoodoo man called Doc Horus. In amongst his totems, tinctures, mojo hands, and love-me-or-die, he also had a series of devices, some of which he thought might heal two wanin’ hearts.’

‘Well now,’ said Ollie, ‘I have heard tell of devices like that, and it would be right ungentlemanly of me to deny you the happiness I could give to you with one.’

‘Oh Ollie, you misunderstand me,’ said Polly Prim, and in one fell swoop, hurled off her prim bodice and skirts to stand there naked as a baby moleman, freshly plucked.

‘We’re going to ride the marital train, Ollie, but this time, I’m gonna be the caboose. What do you think about that?’ she said.

‘What do I think?’ said Ollie, runnin’ his fingers through the sudsy water. ‘I think we’re gonna need more soap.’

Wouldn’t you know it, they was married two days later and back to robbin’ mail trains.

Underbaron Quimley No-pipes Wheelbarrow III, Ninth Burl of Whimsymere, Keeper of Her Majesty’s Secret Bun Cupboard, and the last of his line after the Wheelbarrows were decimated in the great scoliosis plague of 1997. He is a rare thing in a sea of things that are not rare – a writer of both high and low brow literature. His entertainments have graced pages such as the one you see above you, and other such pages so numerous that to list even one would be exhausting. His work has been described as ‘this is something that someone has written’ (Shroomsperp Post) and ‘cowboys… not… awful’ (The Daily Whippet).

He is represented in Australia by his distant uncle Adam Hadley, who is a cofounder of Bad!Slam!No!Memoir!.